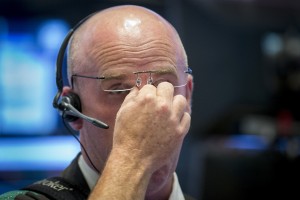 Based on data from the Federal Reserve, the funds are sitting on nearly $4 trillion in assets that are more than 70 percent exposed to equities and other riskier assets, such as commodities and hedge funds. And some states with massive pension funding deficits, such as Illinois, are likely most in danger of suffering big losses given their risk profiles.

Since the financial crisis, many public pension funds have increased their exposure to hedge funds and other higher-risk assets to meet ambitious investment return targets. Most funds assume a rate of return of 7-8 percent a year, according to a May report by the National Association of State Retirement Administrators. Those assets can also take a big hit when equity and related markets plunge.

At the same time, they have cut back on safer assets, such as U.S. government debt and other lower-risk fixed income investments, which are not expected to provide big returns in the next few years.

Most major pension funds have also stopped short of employing other approaches to limiting losses in broad market sell-offs such as volatility management or dynamic asset allocation strategies that have attracted more attention in recent years, according to industry experts.

“A lot of them have just put their foot on the accelerator,” said John Vitucci, an actuary at accounting firm O’Connor Davies and a teacher at Columbia University’s actuarial science program. “They are very heavy in equities.”

MOVE AWAY FROM FIXED-INCOME

The change in asset mix in the sector over the last 25 years has also seen a move out of U.S. stocks and fixed income into international stocks. As a result, the recent sharp declines in European and emerging market stocks may have only added to the volatility for the pension funds.

Direct stock market exposure has fallen from 52 percent in 1992, to 49 percent at the end of 2014. Of total assets, 27 percent is in international stocks compared with just 4 percent in 1992, according to the latest data from CEM Benchmarking.

Fixed income assets have shrunk to 25 percent from 40 percent in that time, while the funds’ private equity weighting has climbed to 10 percent from 2 percent, and real assets – such as commodities – have risen to 11 percent from 7 percent. Hedge funds, unheard of in public funds in 1992, now represent 5 percent of assets.

Earlier this month, U.S. stocks plunged for six successive days on concerns that already weak global economic growth may be heading lower, especially given China’s increasingly troubled economy, with the S&P declined more than 11 percent while stocks in Asia and Europe slid by similar amounts. Those falls have since been partially reversed.

Among state’s with pension funds having equity-type exposure of 80 percent, according to their 2014 annual reports, are those in Illinois, Louisiana, Michigan, and Alaska.

For some of these states, such as Illinois, whose largest public pension fund, the $45 billion Teachers’ Retirement System, had equity and equity-like exposure of 81 percent, getting slammed by a market meltdown would be another blow to a state already in crisis. Illinois’ pension funds are the most underfunded of any U.S. state, with an unfunded liability of $105 billion.

The financial crisis left a hole in assets in many public pension funds, making meeting investment targets even more critical. The average public pension fund has only 78 percent of the assets it needs to meet its liabilities, according to a 2014 survey by Wilshire Consulting, down from 99 percent in 1990.

Years of low interest rates have also been a blow to funds that have seen returns from fixed income dwindle.

U.S. public pension funds discount their future liabilities at their expected rate of return of 7-8 percent. Some economists argue that they should use a rate that more closely reflects long-term risk-free interest rates based on the yield of long-dated Treasuries. With the 30-year Treasury currently yielding around 3 percent that would make the plans far less adequately funded than current estimates.

Demographics are working against pension funds as large numbers of baby boomers retire and people live longer. Growing benefit payouts made to members as plans mature puts an additional strain on their asset base. At New York’s $184.5 billion Common Retirement Fund, over 63 percent of members are over 45 years old.

TAXPAYERS ON THE HOOK

Another market meltdown could add billions in liabilities for taxpayers in the municipalities that stand behind the plans.

A spokesman for the Common Retirement Fund, the third largest in the nation, said diversification will help the fund ride the current roller coaster. “This is clearly a challenging time for all investors,” he said.

Illinois’ TRS “will take all appropriate steps to maintain our members’ assets,” in the wake of the stock market free fall, said TRS spokesman Dave Urbanek last week. He added that the volatility re-enforces the funds’ strategy of building a “highly-diversified portfolio designed to help the system weather market conditions like these when they occur.”

A spokesman for Louisiana’s State Employees’ Retirement System said with an asset allocation of 57 percent equities, 14 percent fixed income, 14 percent private markets, and 15 percent in a sector it terms Absolute Return and Global Asset Allocation, its portfolio was “broadly diversified across asset classes and geographies.”

However, diversification among risk assets does not take into account the high levels of correlation between asset classes that are often seen in panicky selloffs, says Tamara Burden, an actuary at pension consulting firm Milliman who has been meeting public funds this week to discuss risk management.

Representatives for Michigan and Alaska did not immediately return request for comment.