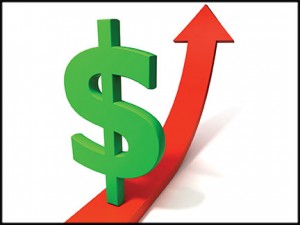 In growth equity, sponsors typically invest cash in return for non-control minority stakes in fast-growing companies in such fields as technology, health care and energy; the money invested is used to finance growth and, in some cases, to let founders achieve a measure of liquidity on their earlier investments.

The pace of growth equity deals picked up moderately in the first half of 2014, but total dollar volume jumped as sponsors up-sized their investments dramatically.

As of July 28, U.S. sponsors had closed 220 non-control deals, up from 217 in the corresponding year-ago period. It was the busiest half in at least two years (see accompanying chart). More striking is the increase in disclosed deal value in 2014 to $13 billion as of July 28, up from $5.6 billion in the year-ago period, according to Thomson Reuters data.

Behind the surge of mega-growth-equity deals is a rise in acquisition prices across the board, a universe of larger target companies built up with add-on deals, a need by sponsors to put cash to work, and an increase in capital-intensive energy investment opportunities. Entrepreneurs, meantime, often prefer taking growth equity to a leveraged buyout for the chance to stay in control of their companies while still achieving partial liquidity. It’s also a way to raise capital without an initial public offering. While the IPO market remains robust, going public too soon can lead to a lasting stigma for a deal.

Among the larger deals this year, Blackstone Group took part in an investor group that bought a $2.1 billion stake in Gecina SA, a real estate investment trust. Two other deals tipped the scales at $750 million each.

Tech deals continue to dominate the growth equity dealscape, but the energy and power sector is growing fast, accounting for 41 non-control deals by U.S. sponsors in 2013, up from 29 in 2012. (See accompanying chart.) In fact, two of the top ten richest non-control deals so far in 2014 were in energy and power, led by a $635.4 million purchase by Kohlberg Kravis Roberts & Co of a 33.3 percent stake in an Acciona Energia International SA cogeneration.

Frost Cochran, managing director of Post Oak Energy Capital, said the energy sector lends itself to minority investment deals because it requires lots of cash for drilling and other development costs to start getting oil and gas out of the ground.

“We regularly take minority interests,” Cochran said. “It continues to be an active area and will be because the energy space is such a capital intensive business, especially in the early stages.”

So many trends in private equity start with institutional investors and this one is no different.

“For some LPs, venture investing is too risky and buyout deals are beginning to look too expensive, so LPs are looking for the middle — growth equity,” said Jeff Davis, a partner at placement agency Eaton Partners. “Every buyout fund looks the same, so growth equity fits a perfect gap in the market for many LPs. Others believe these investments provide a similar return as buyouts but without all the leverage.”

The State of Hawaii Employees’ Retirement System counts JMI Equity Fund V, the vintage 2005 pool from JMI Equity, as the top performer in its private equity portfolio with an investment multiple return of 4.8x as of Dec. 31. Twenty-one of the pension system’s 158 private equity fund investments fall into the growth equity category, with JMI ranking first in performance, TA IX LP in the 13th slot with a 2.37x investment multiple and Summit Ventures VI-B LP in 20th with a return multiple of 2.04x.

CalPERS, the largest public pension fund in the United States, has since 2011 allocated 15 percent of its private equity portfolio to growth expansion funds, one of five sub-sets. Growth expansion delivered a 10-year return of 8.6 percent, ahead of the 5.9 percent return for opportunistic funds, and 4.3 percent for venture capital, but behind the 17.2 percent return for buyouts and a 15.2 percent return for credit, according to the pension system’s 2013 private equity report. Sister pension CalSTRS, which breaks out expansion capital as one of six categories in its private equity portfolio, says that in the 10 years ending September 30 the category has delivered a return of 15.1 percent.

Interest in the asset class by these and other LPs has led to expanding fund sizes among growth-equity firms.

JMI Equity at press time had taken in $938 million for JMI Equity Fund VIII, above its $900 million target, and many LPs expect the pool to draw in at least $1 billion, as Buyouts reported on June 20. JMI’s prior fund tipped the scales at $875 million.

TA Associates raised $4 billion for TA XI LP in 2009, well ahead of the $3.5 billion raised for TA X LP in 2006. With TA XI LP about 60 percent invested now, the Boston-based firm is expected to return for TA XII in 2015, according to a placement source. A spokeswoman for TA Associates declined to comment.

“Larger firms are struggling to deploy all of the capital they’ve raised and if they get a chance to make a minority investment in a great company, they are now probably more willing to consider that,” Kafker said. “Before, they may have preferred to do 100 percent or a control deal.”

Robert Morris, managing partner of Olympus Partners, said given the gains by public equities and healthy cash distributions to LPs, it’s no wonder that minority deal sizes have mushroomed of late.

“Markets are rising so people are understandably comfortable and they’re saying ‘Let’s deploy money,’” Morris said. “But valuations for both minority deals and buyouts are pretty full. If the market or earnings crack, you’ll have problems.”

Paul Cicero, a partner at Goodwin Procter, offered another risk. Buyout pros typically don’t get their usual seat behind the wheel.

“They’ll say, ‘We want to get rid of the CEO – what can we do?’ But you can’t,” Cicero said. “They’re not used to it. If you don’t control the board, you can’t force anything. You can block actions if you have some protective provisions, but you can’t affirmatively take action, which buyout pros find a little frustrating.”

And  a hot market for growth equity has only meant further erosion in leverage for sponsors.

Two years ago, Cicero said, $30 million would often buy a significant interest in a company and a slew of deal protections in the transaction documents. Now, twice that amount gets a small percentage of the company and a right to participate in future upside, with few or no protective provisions.