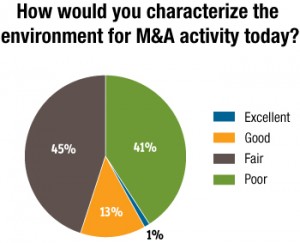 Optimism is scarce in the middle market, according to the ACG-Thomson Reuters Year-End 2008 Dealmakers Survey, which found more than eight out of ten respondents classifying the M&A environment either as fair (45 percent) or poor (41 percent). There was, however, a feeling among private equity respondents that the debt markets were likely to improve somewhat over the next six months, if only because the consensus seems to be that they can’t get any worse.

The outlook for the next six months was predictably dreary. Among all respondents asked for an assessment of the M&A environment come June 2009, 44 percent said they expect it to be worse, 31 percent said about the same, and only 24 percent see better days ahead.

Fueling this view, the most negative in the five-year history of the survey, was concern about the ongoing impact of the credit crunch and, by extension, the overall economy. For example, 65 percent and 46 percent of those polled, respectively, viewed these influences as among the greatest current threats for private equity firms. This specific question was directed only at private equity participants and respondents were asked to check all threats that applied. Forty percent of all respondents to the survey viewed the credit crunch as the biggest potential impediment to corporate growth over the next six months.

The results illustrate a stark progression towards pessimism in the past year and represent some degree of capitulation from the view that the middle market could remain insulated from the woes of the wider economy. The 2007 year-end survey found 72 percent thought the M&A environment was good or excellent, compared to only 14 percent now. And just six months ago, 43 percent of those polled were still holding at good or excellent.

“The macro-economic environment has to get better,” said Mark Jones, a partner with Chattanooga, Tenn.-based middle-market shop and chairman of the ACG InterGrowth 2008 Dealmakers Conference. “Everybody is a prisoner of the present right now.”

The survey, conducted in November, polled 970 middle-market participants, including investment bankers, corporate development officers, lawyers, accountants, business consultants and buyout professionals. About 19 percent of the respondents were classified as members of private equity, venture capital or buyout firms, and a number of the questions on the survey were addressed to only that group. The vast majority, 926, of those polled were from the United States. The view that the debt markets could get better is supported by results showing 58 percent of private equity respondents thought the debt markets would be “a little better” six months from now. Another seven percent went with “much better” and 22 percent said “the same.” That left only 10 percent saying “a little worse” and three percent at “much worse.”

“There is some hope out there,” said Jones, of River Associates, “After all, lenders have to lend.”

“PE firms are still sitting on huge piles of dry powder and they’re yearning to use it,” said Dennis White, a partner with law firm McDermott, Will & Emery LLP and ACG Vice Chairman. “What they need now is a pickup in financing. At this point, the [financing] river isn’t frozen solid but we’re still very early in the thawing process.”

One driver for a pickup in M&A activity could be the overwhelming view that the current M&A environment represents a buyer’s market. A resounding 81 percent of all respondents held this opinion against only 1 percent who viewed it as a seller’s market. Seventeen percent weren’t sure. That attitude provides at least a partial explanation of the relative logjam in dealmaking. Beyond the tight lending market, there is also a feeling that sellers have yet to adjust their expectations to the new reality of the marketplace.

“There’s always a lag effect between buyer and seller expectations,” said Jones, of River Associates. “But, right now, it’s difficult to get together on a valuation. There’s still an element of coming to grips with how things have changed.”

And even if sellers adjust, there’s the question of whether buyout shops can really make a decent return without ample supplies of leverage. Asked how much equity they expected to put in deals in the next six months, 43 percent of private equity respondents said between 35 percent and 50 percent, and 16 percent said more than 50 percent. A follow-up question found that for 58 percent of respondents, their equity component forecast represented an increase from prior levels.

Other telling results for questions aimed specifically at private equity respondents: a majority (55 percent) plan to hold steady on average portfolio company values in the next quarter when asked if they planned to write the values of their portfolio companies up or down in the next quarter; nearly four of ten (38 percent) of respondents said they were modifying their investment strategy in the current environment; and a total of 66 percent have either already adopted FAS 157 fair value accounting standards or said they plan to.

According to data from Thomson Reuters, the publisher of Buyouts, worldwide M&A deals in the middle market fell 16 percent year-over-year to $569.6 billion through the first three quarters of 2008. Thomson Reuters defines the middle market as transactions under $500 million. The volume of all M&A worldwide totaled $2.4 trillion in announced deals through the third quarter, down 28 percent from 2007’s historic levels for the same period.