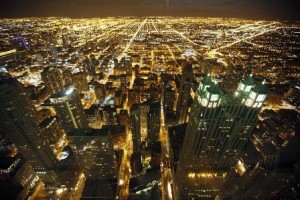 Since the beginning of 2014, seven of the top 10 fundraisers are resident Illini, while the other three call the North Star state home. The leaders are BDT Capital Partners, which raised $5.2 billion; Thoma Bravo, which collected $4.7 billion over two funds; and Lasalle Investment Management, which raised almost $2.4 billion across three funds.

BDT Capital is one of the more low-profile firms in the industry, quietly raising its second fund largely from wealthy individuals. The firm is run by Byron Trott, former vice chairman of investment banking at Goldman Sachs.

Thoma Bravo, meanwhile, went on a fundraising tear, collecting around $3.6 billion for its 11th fund last year, and another $1.06 billion this year for a “top-off” fund that will invest alongside the main vehicle.

Deal activity in the Midwest is keeping a strong pace, representing 15 percent of all buyout deals in the United States and 13.6 percent of the dollar total for 2014.

Year to date, Midwest deals account for 14.7 percent of the U.S. total, while fundraising by Midwest firms makes up 11.3 percent of the national total.

Of the 387 Midwest deals done by U.S.-based sponsors since the start of 2014, the industrials sector was the top industry, with 78 deals (20.2 percent). Materials was the second hottest sector, with 57 deals (14.7 percent), followed closely by consumer products/services, with 56 deals (14.5 percent).

The largest deal since the start of last year was NewPage Holdings, a wholesaler of paper products that was bought by Apollo Global Management for more than $4.3 billion from Cerberus Capital Management. (The purchase was made by Verso Paper Corp, a unit of Apollo.)

On the deal advisor front, Kirkland & Ellis was the No. 1 legal advisor, while Goldman Sachs & Co was the top financial advisor. They both came out on top in total deal value, market share and number of deals.

The source for the data is Thomson One, a product of Thomson Reuters. The data is current as of June 1, 2015.