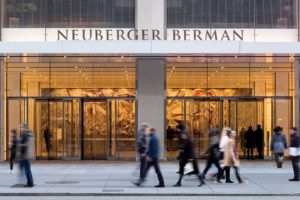 Fund IV is already approaching the size of its predecessor, wrapped up two years ago at $1.7 billion, ahead of a $1.5 billion target.

Limited partners participating in the February close included 25 institutions, the sources said. Commitments were made by a substantial number of first-time LPs, they said, as well as returning investors. Fund III was backed by more than 60 global institutions.

A key aspect of the strategy is access to deal flow generated by a large universe of private equity managers with close ties to Neuberger.

The New York firm partners with more than 530 funds, sponsored by a Who’s Who of general partner teams. This allows the private debt group to cherry-pick quality opportunities, typically in sectors that proved resilient during the health crisis, such as healthcare, software and services.

Fund IV will maintain the strategy, tapping into a deeper pool to write bigger checks for bigger deals, the sources said. While Fund III’s investments average $25 million to $100 million or more, its successor will be able to invest up to $250 million. It will also undertake slightly more loans.

Because of covid-19, private debt fundraising fell to a six-year low in 2020, Private Debt Investor reported. A total of $149 billion was collected globally, down 25 percent from 2019. The trend line could change, however, as fresh opportunities open up in the year ahead.

A survey issued this week by Katten found improved volumes in private credit markets in 2020’s final months inspired optimism among dealmakers about a full rebound in 2021. Ninety-one percent of PE investors and 80 percent of lenders surveyed expect deal flow to increase this year.

This is perhaps reflected in the activity of Neuberger’s private debt group. It deployed $1.6 billion in the past six months alone, the sources said, while Fund IV has already committed $500 million.

Recent deals include a unitranche financing led by Neuberger for the acquisition of Meazure Learning, a remote exam proctoring company. The majority buyer, Gryphon Investors, announced the close in December.

Neuberger declined to provide a comment on this story.