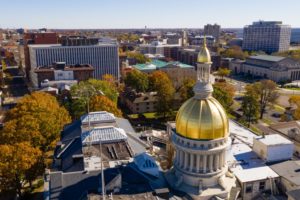 New Jersey Division of Investment has opted to take partnership interests in two vehicles run by the new firm to be created following the merger of Owl Rock Capital Partners and Dyal Capital Partners, its executive director and chief investment officer said Wednesday.

New Jersey has taken stakes in Owl Rock in previous commitments, and as of the end of 2020 has an interest valued at about $71.5 million, according to meeting documents. That leaves the pension entitled to take some sort of stake in the new entity set to rise from the merger of the two firms.

Corey Amon told the state investment council that staff had chosen to take “partnership units” in two limited partnerships to be managed by Blue Owl, the name of the new publicly-traded entity should the merger go forward.

The Division was offered a choice between the partnership units and taking public stock in the new entity.

“The Division believes that the election of partnership units is beneficial to the pension fund,” Amon said. He said the illiquidity of the partnerships mean they are not subject to market volatility, that they pay higher distributions to tax-exempt entities like the pension fund, and that they can be exchanged into more liquid shares in Blue Owl on a quarterly basis should the Division want to do so.

Amon also informed the council of another modification to an Owl Rock co-investment vehicle dating back to a 2016 commitment to an Owl Rock separate account vehicle. That mandate included overage opportunities over which the Division has veto rights.

Amon noted this would provide the pension with increased options to deploy capital in private credit, where it remains underweight. It raised its private credit target from 6 percent to 8 percent last year, as Buyouts reported. As of January 31, the allocation stood at 6.89 percent.

The Division has previously invested in several vehicles from both Dyal and Owl Rock, which would now be managed by a new investment advisor controlled by Blue Owl.

“The Division does not anticipate the merger will have a material impact on the pension fund as the existing investment teams and the investment terms will remain in place,” Amon said.

Dyal is a unit of asset manager Neuberger Berman focused on stakes in private equity managers. Owl Rock has emerged as one of the premiere private debt managers in the space following its founding by Doug Ostrover (who previously founded GSO, now a part of Blackstone), KKR veteran Marc Lipschultz and Goldman Sachs veteran Craig Packer.

The firms announced a merger last December, according to sister title PE Hub. The two firms agreed to merge with Altimar Acquisition Corporation, a blank check company sponsored by HPS Investment Partners, to form Blue Owl. The new entity will have over $45 billion in assets under management and a market value of about $12.5 billion.

The proposed merger has triggered a lawsuit from debt firm Sixth Street. Dyal’s third fund owns a stake in the firm, according to Institutional Investor. Sixth Street argues Dyal principals will now “co-manage and economically benefit from a directly competing business that will control Dyal’s minority interest” in the firm, according to the lawsuit. Dyal and Owl Rock have rejected Sixth Street’s claims and the case is ongoing.

New Jersey did not respond to a request for comment.