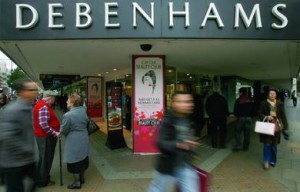 Private equity group CVC Capital last week used a £323m capital-raising by Debenhams to sell 51m shares in the UK’s second largest retailer, reducing its stake to just under 3% and effectively bringing to an end Debenhams’ ownership by private equity.

Following the capital-raising, representatives of CVC Capital and TPG resigned from the company’s board of directors as they saw their shareholdings either diluted or fall below the 10% level needed to remain on the board.

According to a source close to the transaction, the sale by CVC Capital resulted from an approach by banks during the bookbuilding process to sell a chunk of its shares in order to meet additional demand from investors.

TPG declined to comment on the capital-raising and it is not clear why it held on to its shares while CVC Capital sold, although some sources suggest that the private equity firm might believe there is still some upside in the shares given that they have traded above the 80p offer price, reaching 96p earlier in the year.

The transaction effectively brings to a close the saga of Debenhams’ ownership by private equity, which saw the company taken private by CVC Capital, TPG and Merrill Lynch in December 2003. According to data from Thomson Reuters, the private equity investor group paid £1.7bn for Debenhams, subsequently floating the company on the market just under three years later at £1.95 per share, successfully raising £1bn but leaving the company laden with debt.

Debenhams will use the proceeds from the transaction to reduce its net indebtedness, which according to the company stands at just over £970m, as well as to fund “opportunistic acquisitions” of other retail assets.

Rumours this week have linked Debenhams with a potential bid for the retail assets of House of Fraser and distressed Icelandic group Bauger. Commenting on the rumours, John Stevenson, an analyst at KBC Peel Hunt, says: “The opportunity to convert stores from House of Fraser is an option but they would not necessarily target the most successful stores due to the problems of cross-over.”

Debenhams has stated that any acquisition would need to be earnings-enhancing and as such acquiring stores from another retailer that compete with its own flagship stores looks like an unlikely scenario. In a further development this week, House of Fraser denied it was in talks to sell any of its stores, leaving commentators to speculate on other possible targets.

In a trading statement issued on Thursday, Debenhams said that sales at stores open at least a year fell 0.8% in the 12 weeks to May 23, but gross profit margin was up 0.9%. Shares in the retailer finished the day yesterday (June 16) at 79p, down 1p on the 80p offer price.