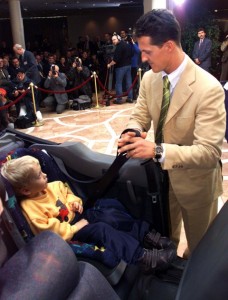 Based in Chertsey, U.K., Britax is a portfolio company of Nordic Capital, which acquired it in 2011 with its Nordic Capital Fund VII fund. Britax booked revenue of 370 million euros in 2013.

While Moody’s said Britax supports a well-diversified revenue stream in Europe, the United States and Australia, it’s facing challenges specific to some regions.

Moody’s now expects Britax’s debt/EBITDA on an adjusted basis to be above 11x for the next 12 to 18 months.

Britax and Nordic Capital did not respond to requests for comment.

Moody’s cut Britax’s corporate family rating to Caa1, “containing substantial risk,” from an earlier view of B3, or “very speculative.” Moody’s also lowered its probability of default rating on Britax from B3-PD to Caa1-PD, which indicates a substantial risk.

“Although we view positively the strength of Britax’s brands and its competitive positioning, the group’s heavy focus on child safety and mobility compared to other global brands remains a constraining factor,” Moody’s said. “We expect improved and lower-priced product offerings from competitors will negatively impact the company’s profitability.”

Tracing its roots back to 1939, Britax has been moving from car seats into other baby product categories. In recent years it has acquired B.O.B, a North American producer of wheeled goods and accessories, and Brio, a European strollers and accessories maker.