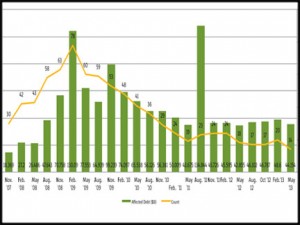 With half of 2013 behind us, the number of companies on S&P’s ‘Weakest Links’ list has fallen as economic recovery in the United States takes stronger hold. The latest monthly report, entitled “Global Weakest Links and Default Rates: The Weakest Links Count Decreased To 136 Issuers In May,” looks at the ratings issued by the firm through May 23rd.

In order to be included in the list, an entity must have a speculative corporate credit rating of ‘B-‘ or lower, plus a negative outlook, a CreditWatch with a negative implication or both.

The number of PE-backed firms on S&P’s ‘Weakest Links’ has fallen steadily since February 2009 at the height of the financial crisis when there were 78 portfolio companies listed. More recently, based on the ratings released in early March, there were 20 portfolio companies with an aggregate debt of $48.6 billion three months ago when Buyouts magazine last reviewed the list. The aggregate value of LBO-backed companies’ debt is also significantly smaller than the $134 billion high witnessed in August 2011.

Over the past quarter, four new portfolio companies were added to the ‘Weakest Links’ list, while ten companies left.

Indicating gaining momentum in the economy, the loss of ten portfolio companies from the list is substantial as it is the largest number of firms being dropped in recent quarters. Three dropped out due to having their corporate credit rating upgraded, a reassessment of their negative outlook, or both.  Of the new entrants, most were added due to liquidity concerns and two come from the high technology industry while the third and fourth represent the consumer products and health care industries, respectively.

Based in New York City, the customer care and accounts receivable collector iQor Holdings Inc. was taken off S&P’s ‘Weakest Link’ list following its acquisition of CCT Group in a deal financed with preferred equity from backer HGGC, formerly known as Huntsman Gay Global Capital LLC. Simultaneously, the company revised its leverage covenants under its first-lien term loan, resulting in a larger EBITDA cushion this year and an increased rating from ‘B-‘ to ‘B’. iQor is now believed to meet its net leverage covenant and has been issued a stable outlook.

Of the ten entities that were removed from the “Weakest Links” list, two portfolio companies were withdrawn at their own request. S&P withdrew the ‘CCC’ rating for the Yardley, Pa.-based health care media company MediMedia USA Inc. in March 2013 while the previously ‘CCC+’ rated Atrium Co. Inc. was withdrawn in May 2013.

Univita Health, based in Scottsdale Arizona, is new to the list this quarter as S&P lowered their corporate credit rating to ‘B-‘ from ‘B’ in May 2013. The insurance administration services and integrated health care company has backing from Genstar Capital and Northstar Capital. S&P revised its rating after the company reported EBITDA that was 20 percent below what the agency was expecting, resulting in tightened covenant cushions over the last two quarters. Simultaneously, a negative outlook was issued by S&P as liquidity is expected by the ratings agency to remain constrained over the next year with minimal free cash flow.

Another new addition to the list is Artel LLC, which had its corporate credit downgraded from ‘B’ to ‘B-‘ in April 2013. Backed by Torch Hill Investment Partners and TPG Growth, the U.S. government contractor is expected to face difficulty with upcoming interest coverage covenants due to their being stepped-upped along with delays with task order awards as a result of Washington D.C.’s sequester. Looking forward, Artel has been given a negative outlook due to uncertainty surrounding its ability to maintain compliance with its year-end covenants.

Another sign of improving macroeconomic conditions is the general decline in the rate of global corporate defaults. In the first two quarters only 36 companies received a ‘D’ or ‘SD’ designation by S&P as opposed to 85 in 2012 and the 264 companies recorded in 2009.

Of the 36 companies defaulting in 2013, only four were LBO-backed, accounting for roughly $41.5 billion of affected debt. The only portfolio company that was put on S&P’s defaulter list in Q2 was the Kohlberg & Co. LLC-backed AGY Holding Corp. when the company did not made its due interest payments of nearly $10 million on May 15th for its 11 percent second-lien notes due 2014.

This action resulted in S&P downgrading the U.S.-based glass yarns manufacturer’s corporate credit rating to ‘D’ from ‘CCC’. Rather than make the coupon payment, the company announced that it had reached an agreement with most of its bondholders to restructure the debt. According to the 8K filed on May 15th, bondholders of the 2014 notes will exchange them for new 11 percent second-lien notes due at the end of 2016 as well as convertible preferred shares.

Simultaneously, there was a new addition to the list of portfolio companies that filed for bankruptcy protection in 2013. Listed as a ‘Weakest Link’ in S&P’s June 7th report, home and garden retailer Orchard Supply Hardware LLC filed for Chapter 11 bankruptcy on June 17th. Less than two years after its spin-off from Sears Holdings Corp, the Ares Management LLC-backed company has cited heavy dividends paid out to its former parent as the reason for its “substantial debt”.

Orchard Supply listed total liabilities of $480 million and total assets of $441 million and stated in a court filing that it would be unable to make payments when the first tranche matures in December. To help meet financial obligations during bankruptcy proceedings, the company has secured commitments for $177 million in debtor-in-possession financing. Acting as a “stalking horse bidder”, rival retailer Lowe’s Cos has stated that it would purchase at least 60 of the company’s 91 neighborhood stores throughout California for approximately $205 million while also assuming payables owed to nearly all of the company’s suppliers.