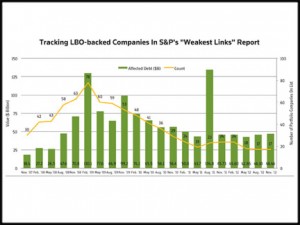 As we approach Dec. 31, it appears we may finish 2012 with more LBO-backed companies having filed for bankruptcy protection this year (19) than the tally of portfolio companies (17) that S&P views as at risk of a debt default.

The latest monthly report, published Dec. 3, examined the ratings the agencies issued through Nov. 19. It was titled,“Global Weakest Links And Default: The Weakest Links Count Increases To 145 Following Argentina’s Downgrade.” Buyouts reviews the report quarterly. To make the list entities must have a speculative corporate credit rating of ‘B-’ or lower, plus a negative outlook, a CreditWatch with a negative implication or both.

Companies and others on the global “weakest links” had a total debt of $233.2 billion. The aggregate is slightly less than the $237 billion in debt the 128 entities in the August report had. From the latest pool Buyouts identified at least 17 with LBO backers. These businesses had debt of $46.1 billion. The LBO-backed companies in the older report had combined debt of $46.1 billion. The total count of companies on the “weakest links” list rose to 145 in mid-November 19 from 139 on Oct. 24.

Two In, Two Out

Jacuzzi Brands Corp. was one of two portfolio companies dropped since Buyouts last reviewed the listing. The spa and bath manufacturer has backing from Apollo Global Management and Ares Management LLC. S&P cut its rating on Jacuzzi Brands to ’CCC’ from ’B-’ in March 2012.  At that time, Credit Analyst Megan Johnston said, “The downgrade reflects our view that highly leveraged Jacuzzi faces significant near-term refinancing risk as its entire capital structure matures over the next two years.”

Jacuzzi Brands was removed from the “weakest links” list in late September after the ratings agency revised its outlook on the company to developing. The change came after Jacuzzi Brands extended the maturity of its $45 million asset-based lending facility to December 2013. S&P viewed the move as providing the portfolio company with more time to refinance its debt maturities and necessary liquidity.

With all the changes on the listing, the net effect was flat, based on the total number of entities with LBO-backers in the latest listing. The two exits were offset by the inclusion of two entrants.One spot was filled by Ascend Learning, which is part of Providence Equity Partners LLC’s portfolio. Burlington, Mass.-based Ascend Learning was added to the “weakest links” list on Oct. 2. It fell in line with the criteria after S&P downgraded the provider of technology-based learning solutions to ‘B-’ from ‘B’ because of weak profits.

The other addition was Golden Gate Capital’s Aspect Software Inc. S&P cut provider of contact-center software’s corporate credit rating to ‘B-’ from ‘B’ on Aug. 28, after the Chelmsford, Mass.-based company reported greater-than-expected revenue and profit declines for the second quarter. Aspect Software’s revenue for the June 2012 quarter fell about 24.5 percent from a year earlier, according to S&P.

The ratings outlook on Aspect Software is negative. The agency said in August the outlook reflects its “concern that sustained operating performance weakness will further pressure credit metrics and the company’s ability to comply with its leverage covenants.”

Through Nov. 19, S&P tagged 74 entities as global corporate defaulters including confidentially rated parties. The agency must issue a ‘D’ or ‘SD’ rating to be included in the list of defaulters. The businesses collectively have $74.9 billion in debt. Those with a U.S.-based LBO sponsor numbered 11 and these had total debt of about $9.98 billion. The latest addition is AMF Bowling Worldwide Inc., which has backers in Bruckmann, Rosser, Sherrill & Co LLC; CBPE Capital LLP and Code, Hennessy & Simmons LLC.

AMF Bowling was downgraded to ‘D’ from ‘CCC’ after the operator of bowling centers missed making an interest payment on its credit facilities. The Mechanicsville, Va.-based company is the single buyout-backed defaulter addition in the final quarter of 2012. The year started with four defaulters in January alone, but additions have been minimal since. August was the only month with more than one addition, and there were no defaults in March, June, September and November.

In fact, AMF Bowling is just one of two LBO-backed businesses that filed for Chapter 11 during the fourth quarter.  The company was granted a grace period to make the interest payment until Nov. 6, and a week later AMF Bowling and 15 affiliates filed for bankruptcy protection. It attributed the filing to the recent economic weakness. The company agreed to a plan that would cut its debt, hand control to lenders and allow emergence from Chapter 11 before April 30, 2013.

The other is Pipeline Data Inc. The provider of credit and debit card-based payments processing solutions is backed by Comvest Investment Partners. Bloomberg reported on Nov. 19 that Pipeline Data was hurt by merchant closures and a lack of new clients.

There have been at least 19 bankruptcy filings by companies with U.S.-based financial sponsors so far this year. January and August were the most active months, with four filings each. One of the early filers plans to emerge from protection during the first half of 2013. On Nov. 28, Eastman Kodak Co. agreed to an $830 million financings plan from bondholders. The imaging company filed for Chapter 11 on Jan. 18 and was backed at that time by Kohlberg Kravis Roberts & Co., Blackstone Group’s GSO Capital Partners, D.E. Shaw Group and JPMorgan Chase. Reuters reported in November the financing is contingent on Kodak’s sale of its digital imaging patents for at least $500 million.