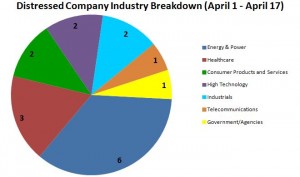 There were 17 in the opening two weeks of Q2, which is an aberration from the norm, according to Buyouts research. The number of sponsor-backed companies with distressed ratings was below 40 in each of the prior two quarters.

One contributing factor is the decline in oil prices. The leading industry among the flurry of downgrades was energy and power, with six of the 17 companies (nearly 35 percent) within that sector. All six of those companies have a connection to oil and gas:

* Samson Resources Corp is an oil and natural gas company sponsored by KKR & Co; and

* UTEX Industries is a Riverstone-backed producer of sealing products for oil and natural gas extraction.

The turmoil in the oil and gas sector only explains part of the uptick in distressed ratings. The accompanying table provides summaries of all 17 distressed companies, while the accompanying chart shows the dispersal of the companies by industry.

In a recent press release, Standard & Poor’s proclaimed that “the current low price of crude oil and natural gas is unlikely to have a widespread impact on the credit quality of global project finance debt over the next year to 18 months. However, if prices remain in the $50 per barrel range for a sustained period or fall further than we expect, the outlook may prove problematic for projects with refinancing risk, market exposure, or input prices.”

While that timeline has yet to be reached, the surge in tough ratings grades could be a signal of tough times ahead.

Oil prices – which have whipsawed from more than $107 per barrel last summer to $42 in March – climbed to their highest levels of the year on April 23 as tensions in the Middle East sparked supply concerns. Brent crude touched a high of $65.13, its highest since December, and was last up 3.6 percent at $64.97 a barrel, while U.S. crude jumped 3.1 percent to $57.92 after Saudi Arabia and its allies continued a bombing blitz in Yemen that raised concerns about the security of Middle East oil supplies.

“Oil prices are going to continue to remain somewhat volatile, although if you look over the last three or four weeks [of April], what has changed in terms of fundamentals is we have seen U.S. production start to level off,” said David Lefkowitz, senior equity strategist at UBS Wealth Management Americas in New York. “Now we are still oversupplied in the near term, but the market is beginning to see the light at the end of the tunnel in terms of a better balance between supply and demand.”

For their part, oil executives expect prices to remain depressed for some time. At IHS CERAWeek, an oil industry conference held the week of April 20, executives said they are bracing for oil to remain at about $60 a barrel for as long as the next five years.

“One can hope for $75 oil but I think one has to plan for a lower price,” said Stephen Chazen, CEO of Occidental Petroleum Corp. Chazen said he was planning for oil to remain at $60.

His view was echoed by others at the CERAWeek conference, where CEOs from majors like BP Plc, Exxon Mobil Corp and smaller independents said they were preparing for prices to remain lower for longer.

Even one of the most bullish CEOs, Scott Sheffield at Pioneer Natural Resources, who plans to ramp up drilling this summer, expects crude to remain between $60 and $80 a barrel for five years.

And yet Wall Street and some private equity firms expect prices to rebound more quickly.

Attorney David Asmus of Morgan Lewis noted that equities prices have already begun to recover, with shares of Pioneer up about 30 percent since December, outstripping gains seen in commodities markets. The Standard & Poor’s index of oil and gas producers has risen over 24 percent since February.

Meanwhile, private equity funds have begun to line up capital for acquisitions to get inexpensive exposure to the energy sector, as they perceive that crude prices will recover, Asmus said. For example, Blackstone Group announced that its second energy-focused private equity fund was oversubscribed, with interest beyond its $4.5 billion cap.

“If all investors thought we would be in the $50s for three years, I don’t think there would be so much fund money piled up waiting for an energy investment,” Asmus said.