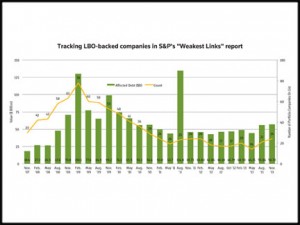 In its latest monthly report, entitled “Global Weakest Links And Default Rates: Weakest Links Count Has Reached A 10-Month High,” S&P reviewed ratings issued through Nov. 19. Companies are considered weakest links if they have been assigned a speculative-grade rating of ‘B-‘ or lower, and the rating has a negative outlook or is on CreditWatch negative, meaning it may be downgraded further in the near term.

Companies in the media and entertainment sector remain the most vulnerable to default, comprising 16 percent of the overall list. However, among the companies that are PE-backed, high technology is the sector most vulnerable to default, accounting for five of the 24 portfolio companies. On a geographic basis, 22 of the 24 entities in the private equity-backed group are based in the United States. In the broader group, just over 55 percent of the companies listed are U.S.-based.

The number of PE-backed companies on S&P’s ‘Weakest Links’ list had fallen steadily since hitting a peak of 78 in Feb. 2009, but has started to creep up again since May. In the last Buyouts review of the list three months ago, there were just 21 portfolio companies with combined debt of $55.84 billion.

Five private equity-backed firms were added to the latest list, while three companies were removed. Of the latter three, two were taken out because their ratings were withdrawn.

The third company to be removed from the list was France-based Oberthur Technologies Holding SAS, which refinanced its debt through the issuance of €558 million-equivalent of senior secured debt and €190 million of senior unsecured notes. While the issuer’s ‘B-‘ rating was reaffirmed, the outlook was revised to stable from negative as the company’s free operating cash flow will be close to breakeven over the next 12 months.

Of the five new entrants, Apax Partners LLP-backed Trizetto Corp had the most oustanding debt at $800 million. The Englewood, Colorado-based provider of IT products and services for the health insurance industry was added to the list on Sept. 13 after its rating was lowered to ’B-’  from ‘B’ due to deteriorating operating performance.

Franklin, Tennessee-based MModal Inc, another high-tech company, was also downgraded to ‘B-‘ from ‘B’. The One Equity Partners LLC-backed provider of clinical documentation solutions, which has about $695 million of rated debt, was downgraded as a result of deteriorating revenue at its base business and concerns that this could lead to further tightening of covenant calculations over the next 12 months.

Healthcare company Lantheus Medical Imaging Inc, which makes cardiovascular imaging products, was downgraded to ‘B-‘ from ‘B’ with a negative outlook on Nov. 4. The Avista Capital Holdings LP-backed company had weaker-than-expected EBITDA, leading to higher leverage and pressure on liquidity.

None of the portfolio companies on the list defaulted during the three-month period, according to S&P, and just one private equity-backed company has filed for bankruptcy protection in 2013, according to Buyouts estimates.

According to papers filed in the U.S. Bankruptcy Court in Wilmington, Delaware, the company had assets and liabilities of $100 million to $500 million. The retailer of golf goods and equipment will seek a sale of its assets by Dec. 6 through a court-supervised auction. The company is expected to continue operating a number of stores and has received an initial bid from a joint venture of liquidator Hilco Merchant Resources LLC and GWNE Inc.