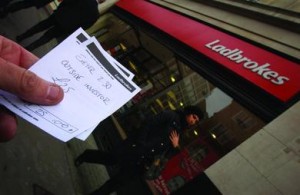 shares have risen on talk of a bid for the UK-listed bookmaker. Market reports noted rumours of a private equity offer at around 370p per share.

Joe Lewis, the private investor, has been identified as the buyer of a stake close to 7% in Ladbrokes. Lewis had been discreetly building a stake for months, and increased his holding last week.

There had been speculation over who was the buyer of a stake, following ’s disclosure that it held shares for a client as a contract for difference. Lewis’s stake is now estimated to be worth £300m (€395m).

Lewis believes Ladbrokes to be undervalued, and is said to be ready to add to his stake if more shares become available. He is not thought to be planning to table an offer for Ladbrokes, although it is believed that a takeover is among his options.

JP McManus and John Magnier, the Irish private investors who are thought to hold slightly less than 3% of Ladbrokes shares, are among Lewis’s associates.