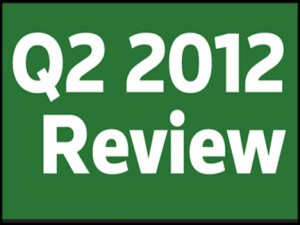 Historically, the second quarter has been a good one for fundraising, but totals so far this year have been so strong that if year-to-date figures were to continue into the second half, they would lift the industry into its first $100 billion-plus year since the golden era between 2005 and 2008, when as much as $301 billion was committed in a single year (2007).

What’s going on? Pensions, for one, “are back in the market, and more aggressive than they have been,” said Bill Barnum, a partner at Brentwood Associates, a mid-market consumer and retail shop that is looking to start raising its fifth fund this year. “There are a lot of exits by GPs right now,” he said, “and these distributions are creating a virtuous cycle, giving investors the ability to reallocate capital.”

And while the IPO market has dried up substantially since Facebook went public, “there was a lot of exit activity from strategic and financial buyers,” said Barnum.

The second quarter’s strong fundraising results dovetail with Coller Capital’s Global Private Equity Barometer from June. The survey’s LP respondents said that they were more than twice as likely to increase their allocation to private equity over the next three to five years as they were to decrease it.

“A big part of this (increased allocation) is investors looking at performance since the downturn,” said Jonathan Gutstein, a partner at Coller. “And these investors see that despite the difficulties, private equity has held up pretty well,” he said.

One symbol of the growing appetite for private equity came from Georgia, which in April became the final U.S. state to overturn prohibitions preventing the state’s pension funds from investing in alternative assets like private equity.

Yet despite the second quarter’s increase in fundraising, competition for commitments is still fierce and is likely to remain that way for some time since so many funds have come to market in the last few years. In April, there were 1,847 private equity funds in the market, according to Preqin Ltd, the alternative asset data provider. That marks a 10 percent increase over the year before. “There are more funds in the market now,” said Aaron Rudberg, a partner at Baird Private Equity, a firm that is raising funds in the lower mid-market. “I think fundraising will continue to be very challenging and will probably be as competitive as it’s ever been.”

Everything comes down to performance, according to Kelly DePonte, a placement agent at Probitas Partners. “If you’re a weak performer, LPs are much more willing to shoot a relationship and not re-up with you,” he said.

There always will be, of course, some “must have” funds that will have no trouble raising money. “The basic difference,” said DePonte, “is that in 2012, maybe 10 percent of the funds are ‘must-have’ funds, compared to, say, 25 percent in 2007.”

The big X-factor for fundraising in the second half is the explosive economic situation in Europe. Will investors hunker down or will they be looking to scoop up bargains? Said Baird’s Rudberg: “North American investors fall into two camps: there are many people who, when you mention Europe, run immediately for the exits. But there is smaller group of people that, when you mention Europe, their ears perk up and they smell opportunity.”

Adding to that uncertainty is a change of heart with regard to emerging markets. “Emerging markets were very hot 12 months ago,” said Rudberg, “but they have cooled off somewhat. There’s a lot more anxiety about them, and that’s healthy because there had been a rush to commit to emerging market funds. Now, there is more of a rationalization about how emerging markets should fit inside your portfolio. The gold rush has cooled down,” he said.

The biggest fund to reach a final close in the second quarter was from Leonard Green & Partners, the Los Angeles-based consumer retail shop that invests in such companies as Neiman Marcus, J. Crew and Whole Foods. The firm’s latest fund, Green Equity Investors VI LP, raised $6.25 billion, exceeding its initial $5 billion target. The fund drew commitments of at least $200 million from the New York City Bureau of Asset Management, the Washington State Investment Board, the Florida State Board of Administration, the Illinois Teachers’ Retirement System, the Minnesota State Board of Investment and the New York State Common Retirement Fund.

Leonard Green and Vista represent a growing trend in private equity: brand-name industry leaders that leverage their performance and expertise to capture large commitments from LPs eager to wager on the success of a particular industry.

“Investors are looking for differentiated product,” said DePonte. “If you have a clearly differentiated strategy that has worked, and Vista is an excellent example of that, you can have a lot of fundraising success.”

One of the biggest surprises so far in 2012 has been that despite recent investor surveys showing that mega buyout funds were out of favor, these funds have done quite well in their fundraising efforts so far this year. Although there were just six U.S. funds in the market with targets exceeding $5 billion, those six funds have raised more than $23 billion so far in 2012. That tally is more than double the $10.3 billion that was raised by mega buyout funds in all of 2011.

Of the big mega funds in the market, there are three that are seeking to raise at least $10 billion. The largest is the latest real estate fund from The Blackstone Group, Blackstone Real Estate Partners VII LP, which has a $13 billion target. So far in 2012, the fund has raised just more than $7 billion.

The next largest fund, and the largest pure buyout fund in the market, is the latest flagship fund from Warburg Pincus. That fund, Warburg Pincus Private Equity XI LP, is seeking to raise $12 billion, and has raised $5 billion so far in 2012.

Rounding out the super-heavyweight buyout funds is the new flagship offering from The Carlyle Group, Carlyle Partners VI LP. The fund, which started raising money earlier this year, has so far garnered $2 billion in commitments.

Other mega funds that are in the market include the latest offering from Advent International, the Advent International Global Private Equity VII LP, which has a $9.3 billion target. Bain Capital has waded back into fundraising mode with its latest flagship offering, Bain Capital Fund XI LP, which has a $6 billion target. Technology buyout specialist Silver Lake Partners has joined the fundraising fray with its latest mega-fund, Silver Lake Partners IV LP, which seeks to raise $8 billion. And, finally, First Reserve, an energy specialist, has begun raising money for its latest fund, First Reserve Fund VIII LP, which carries a $6 billion target.

Despite the rebounding interest in mega funds, the sweet spot in terms of size is occupied by funds that have targets between $1 billion and $5 billion. Such funds have so far raised $38.1 billion in 2012, about 45 percent of all money raised so far this year.

Another firm whose fund had a strong closing was Denham Capital Management. The firm, which invests in energy, power and mining companies, closed Denham Commodity Partners Fund VI LP with $3 billion in commitments, exceeding the fund’s initial $2.5 billion target. The fund attracted a slew of interest from investors such as the University of Michigan Endowment Fund, the Pennsylvania State Employees’ Retirement System and the Florida State Board of Administration.

The Buyouts fundraising survey does not yet register money raised in separate managed accounts, one of the latest trends to garner significant attention and money in recent months. With separate accounts, investors pledge money to a firm which then agrees to manage that money separately, and not commingled with commitments from other investors. Most often, these commitments are larger than typical commitments to commingled funds, and in return for the larger commitments, the investors often expect discounts on fees, access to exclusive investment opportunities and greater say over how their money is invested.

“These (negative) views have everything to do with alignment of interests,” said Coller’s Gutstein. Some investors worry that if they merely invested in a firm’s commingled funds, they could miss out on profitable deals that are steered to separate account investors. “Large LPs have more bargaining power,” he said, “and in a tough fundraising environment, those investors are succeeding in getting better terms” than smaller investors.

Finally, the second quarter saw two of the industry’s biggest players, The Carlyle Group and Oaktree Capital Management, become public companies. Unfortunately for shareholders, both firms finished the second quarter with their share prices below their offering prices.