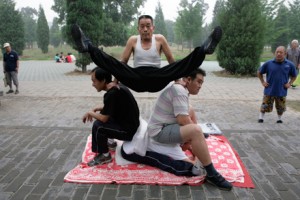 The company expects the offering of 13.5 million class A shares to be priced at $14-$16 per share, raising up to $216 million, it said in a regulatory filing on Monday.

Planet Fitness is selling 9.1 million shares in the offering, while selling stockholders are offering the rest.

The Newington, New Hampshire-based company, which is majority owned by buyout firm TSG Consumer Partners, has more than 950 fitness centers in the United States, most of which are franchised.

With its basic amenities and no-frills approach, the chain caters to first-time or occasional gym users rather than those heavily into fitness.

Planet Fitness, whose motto is “One Team, One Planet”, also features on the popular TV show “The Biggest Loser.”

The company aims to more than quadruple its fitness centers to over 4,000, it said in the filing.

Shares of Fitbit Inc, a maker of popular wearable fitness-tracking devices, surged as much as 60 percent in their debut in June, valuing the company at $6.5 billion.

Planet Fitness plans to list its common stock on the New York Stock Exchange under the symbol “PLNT”.

JP Morgan, Jefferies LLC, Credit Suisse and Merrill Lynch, Pierce, Fenner & Smith are among the underwriters for the IPO.

Reporting by Neha Dimri in Bengaluru.