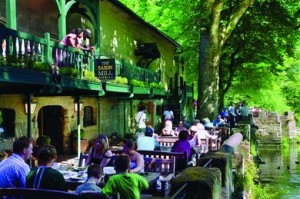 , which reports first-half figures this morning, could reconsider possible tie-ups with rival pub company (M&B) if the latter’s discussions with private equity groups lead to firm proposals from the investors

Firms including , , and , are still believed to be in talks about taking a minority stake of up to 29.9% in the operator of All Bar One and other chains.

At the start of last week, M&B had said that it was exploring a possible purchase of Punch’s managed pubs division, , with assistance from private equity backers. But Punch terminated all discussions regarding any transaction involving M&B last Friday.

M&B retorted that it “continues to believe that significant value from enhanced sales and profitability could be created by integrating Punch’s managed pub business into Mitchells & Butlers”.

A report has suggested that , backed by , could also make an offer for the 890-strong group. Two years ago it bought 290 managed pubs from Punch for £571m.

Punch, meanwhile, has reserved the right under certain conditions to make another offer for M&B, after its initial merger proposal failed. Normally, Punch would not be allowed to make a fresh attempt for six months.

However, the group said it would do so if M&B recommended a proposal from Punch, or a third party made an offer for M&B.

Punch also said that it would reconsider its position if M&B made any material purchase or disposal; raised significant capital worth more than 10% of the existing share capital; changed any executive directors; or saw a material change in its circumstances.

The reference to a change in one of M&B’s four such executive directors is significant, as this condition has never been seen before.

Tim Clarke, chief executive, has already offered to resign this year and could go if his strategic review, due to be published with M&B’s interim figures on May 20, is not accepted by fellow board members.

“We believe M&B needed this deal to help build an investment case; without it M&B is left looking expensive and very geared [financially and operationally],” said analyst Tim Ramskill.

Punch could still come back with a killer blow if events pan out as Dresdner predicts.