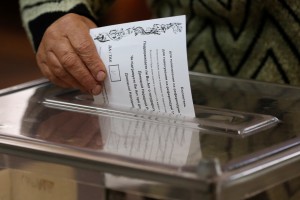 In an online poll conducted between May 20 and June 5, 54 percent of decision makers at private equity firms believe the investment environment will be at least somewhat favorable and the same percentage also agreed that the national economy is headed in the right direction. One fifth of the sample, or 20 percent, believe it will be unfavorable.

On an upbeat note, 73 percent of private equity pros said a majority of their portfolio companies are hiring and making new investments, according to the trade group for the private equity industry, which comprises nearly 2,800 investment firms in the United States.

Asked to choose among 10 sectors that may provide the greatest investment opportunities in the U.S. over the next 12 months, 34 percent said oil and gas, 20 percent said health care, 16 percent said industrials, 15 percent said technology and 5 percent said consumer services. Telecommunications and utilities each got a score of zero percent and a choice for “other” drew 4 percent.

The PEGCC said the Private Equity Decision Makers Survey marked its first to query professionals involved in the decision-making process about their views on the economy and the investment environment.

“Going forward, this survey will provide an exclusive look into the mindsets of some of the world’s brightest financial professionals who are making long-term investments in companies across every industry and operating at the forefront of the U.S. economy,” according to a prepared statement from the PEGCC.

The U.S. Department of Commerce reported a drop of 1 percent in U.S. GDP in the first quarter, and growth of 2.6 percent in the fourth quarter, according to the Bureau of Economic Analysis. In the third quarter of last year, GDP rose at a rate of 4.1 percent.

However, optimism around a continued global economic recovery has pushed up public equity prices to record levels in 2014. Both the S&P 500 and the Dow Jones Industrial Average closed at record highs on June 9, for example.