Hyped for years as a huge opportunity in consumer products and services, the Internet of Things is increasingly being adopted by businesses, lending the category new upside that private capital is keen to exploit.

According to a recent report by Verizon, 2016 was “the year IoT gained significant momentum in the enterprise,” and investment in the sector seems to be rebounding this year following a sluggish spell.

Matt Trotter, managing director for hardware and frontier tech at Silicon Valley Bank, agrees there’s been a “resurgence” of late, representing a shift from personal gadgets to enterprise applications.

“If you flash back three, four years ago, a lot of the [investment] was more consumer stuff,” Trotter said. “Think of FitBit, putting sensors on your body or your home. The most recent activity, and we’ve seen a lot of investment, [is in] enterprise IoT. Essentially, it’s using sensors to collect data and then using machine learning and artificial intelligence to drive certain categories forward.”

So far, 2017 has seen 14 private equity deals for IoT companies, with $2 billion of disclosed capital invested, according to PitchBook. That’s the most in dollar terms since 2013, when firms poured $5.5 billion into the space, including a $540 million growth investment in Vivint, a connected home and residential solar system company owned by Blackstone Group. The level of investment was significantly lower in the intervening years, though deal count spiked to 23 in 2015.

This year’s biggest deal is KKR’s acquisition of a majority stake in Optiv Security, previously a Blackstone portfolio company. Protections for IoT devices, which Optiv says are especially vulnerable to cyberattacks, are a prominent part of the company’s offerings.

Blackstone, which maintained a minority interest in Optiv, also made a strategic growth investment in Entic after using that company’s “smart building” software in its real estate business.

At the lower end of the market, growth equity firm NewSpring Capital led an $18 million funding round in TenFour, a provider of IT network infrastructure including IoT devices, and Texas-based Cimbria Capital invested an undisclosed amount in AMI Global, an industrial and agricultural IoT company. 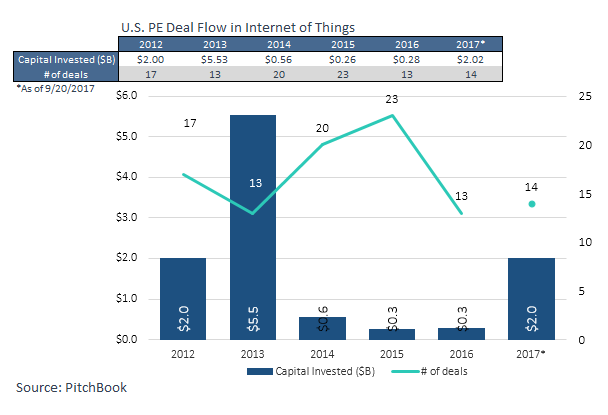 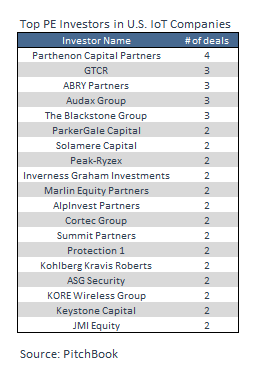 Trotter said he doesn’t hear the phrase Internet of Things by itself “quite as often anymore,” as the concept has morphed into “different categories of business platforms that are being built using that technology.”

While money is still flowing into consumer applications, like the connected home, growth in the sector is being driven by a confluence of new developments: the advent of sensors that are powerful but relatively inexpensive, and advancements in machine learning and artificial intelligence that enable companies to collect and make sense of the data they produce.

The endpoint of the enterprise IoT concept, Trotter explained, is a future “where everything that’s in your house, or every product that you buy, will have a sensor that will give information back to the company who’s selling it. So you get really great data on your customer, how they’re using your product and when it might break, and when you might have an opportunity to upsell them. More and more companies are trying to do that.”

One private equity-backed company poised to profit from the IoT explosion is Ottawa-based Solace, a provider of messaging infrastructure in which Bridge Growth Partners owns a majority interest.

“Singapore’s Smart Nation initiative uses our technology for a variety of functions,” said Shawn McAllister, Solace’s chief technology officer. “One of them is to connect all of their 1,500 buses.” Events like passengers getting on or off, metrics like temperature, and indications of wear and tear are all transmitted to data centers and then distributed by Solace’s technology to different applications, depending on their functions.

This initiative is slated for expansion: By 2020, all 2 million cars in the city-state are to be linked to data centers via cloud-based applications. Tolls will be charged based on vehicles’ locations, without any need for gantries.

Today, “everybody has to line up and cram through these things,” McAllister said. “In Singapore, they’re going to take all those things down. When you get on or off a road, you’ll automatically get charged, and you’ll get charged differently based on congestion.” An onboard application will even suggest the cheapest route to a destination, based on traffic conditions.

Processing the data produced by all these connected devices is an enormous opportunity in itself. That task is being assigned to machine-learning technologies, a subset of artificial intelligence. San Francisco-based Carrick Capital Partners recently launched a machine-learning business with Duke University computer scientist Lawrence Carin, investing $10 million into developing methods of automated interpretation.

“In the business-process area, you produce a ton of data, and getting that data to tell a story is what we wanted to do for clients,” said Carrick Operating Partner Mike Salvino. “What we found with Larry and his team is he could take data that was typically viewed as unstructured — so it could be text like doctors’ notes, it could be images, X-rays and so forth … and he could build technology so that it would tell a story.”

Initial use cases include screening baggage at airports, “a very human-intensive process,” Carin said. “You have humans working, looking at every single X-ray image. They get tired, they get distracted. At Duke, we’ve been working with the [Transportation Security Administration] to develop technology to automate a lot of that.”

An algorithm would make the relatively easy calls, handling bags that clearly pose no threat, with human beings called in to evaluate more difficult cases.

“The same type of thing holds in healthcare,” Carin said. “Every day at a hospital like Duke, cardiologists have to look at more than 200 echocardiograms. Ninety percent are obviously fine, but a doctor has to spend time looking at every single one. That’s another area where we’d like bring automation, not to replace or eliminate humans, but to make humans more efficient.”

Back-office functions are another area of focus. The company ultimately hopes to build a platform, with algorithms categorized to deal with specific business problems.

“When I think of IoT as it relates to machine-learning, it’s basically extending the dataset so that you can push more data through the technology,” Carin explained. “And then the technology is learning with each piece of data you push through it.

“The internet becomes pretty critical to what we’re trying to do, when you look at the top problems, the top opportunities that we have.”