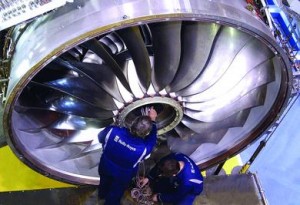 Private equity groups and sovereign wealth funds are expected to step forth with the necessary funding as the debt markets dry up to merge suppliers to the likes of and .

According to the 2008 Aerospace and Defence Review by business advisory firm , the consolidation of tier two or three suppliers in the aerospace and defence sector is likely to accelerate, in part due to the drive by Boeing and Airbus towards becoming systems integrators.

“Facing this strong demand for new programmes and products, wildly fluctuating currencies and increasingly scarce capital due to the ongoing global credit crunch, aerospace manufacturers such as Airbus, Boeing, Bombardier and Dassault have in recent years explored ways to share risk with their entire supply chain,” the report says.

“Companies such as these have retained the roles of design, testing and system integration, while asking Tier 1 suppliers [companies such as Spirit AeroSystems, Honeywell Aerospace, Thales, Messier-Dowty and Goodrich Aerostructures Group] to assemble each major sub-system – which, in turn, rely on Tier 2 suppliers to perform the majority of manufacturing tasks,” it adds.

“Both Boeing and Airbus are streamlining their supply chains and re-focusing their role as system integrating ‘aircraft architects’, and both companies are also divesting non-core aerostructure assets.”

With high oil prices and the global economic slowdown, that has caused a spate of airline bankruptcies in the past 24 months. Such industry pressures, the report says, will also push Tier 2 and Tier 3 suppliers to combine.

“Despite the credit crunch, much of the financing for this consolidation is still available, with strong interest from private equity firms, but investors could also come from the Middle East, China and India,” the report says.

“To meet this challenge, aerospace companies and their owners will have to accelerate the industry consolidation that has already taken place at the Tier 1 level,” says Eric Bernardini, a managing director of AlixPartners and co-leader of the firm’s global aerospace practice.