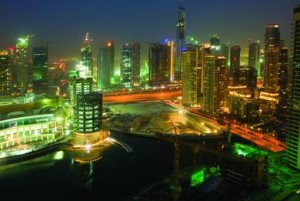 The United Arab Emirates (UAE), traditionally known for its extremely rich oil and natural gas resources, ranks five in the world in terms of GDP per capita and third in the Middle East after Qatar and Kuwait, according to the CIA World Factbook. But the UAE comprises more than these obvious sectors, and areas that are seeing interest include cleantech and construction.

He says: “We see great opportunities for healthcare, technology and cleantech investments in the UAE and the region at large. The latter has a very strong growth story, in terms of GDP, the growth in population, and also the economy in various countries in the region. While the US and certain parts of Europe are facing the worries and risks of recession, this region is still growing very strongly.

“It is moving from government-controlled, highly regulated structures in knowledge-based industries to more private sector-driven, deregulated ones and that is creating a large number of opportunities especially in sectors such as telecoms and media as well as finance.”

Another opportunity to consider is that of cross-border openings, which are being created by Arab entrepreneurs, says Tabaza. The region is being used as a hub to access new opportunities in different countries and regions.

“We are tapping into opportunities where companies are looking to relocate to the Middle East and want to use this part of the world as a gateway to Asian and Middle-Eastern markets. The UAE and Bahrain are tax-free, cosmopolitan havens which attract entrepreneurs, while Jordan and Egypt have very rich intellectual property so they can act as potential outsourcing centres. They are rich in talent and are encouraging knowledge-based investing,” he says.

Discussing healthcare, Tabaza says: “We are seeing movement with regards to non-genetic pharmaceuticals and consolidation in hospitals and currently working on several pharmaceutical deals.”

In the telecoms sector, GSM operators are seeing plenty of action, and “the size of the transactions are very large,” says Tabaza. “Generally in the Middle East the telecoms sector has been a very attractive sector in which to invest and lots of money has been made. This is mainly due to the deregulation that took place in many countries in the region that traditionally had monopolistic telecoms, fixed and mobile operators. In some of the monopolised markets, that has present a private equity opportunity for funds, family offices or government-owned institutions.”

Another less traditional sector that is seeing plenty of activity is that of cleantech. “We have several economies that depend on energy and they are very interested and committed into moving into the next level of energy investment. This is not just about oil and gas but solar and wind energy. We are seeing a strong commitment from countries such as the UAE and also Saudi Arabia in cleantech,” says Tabaza.

He continues: “This part of the world, apart from being very rich in oil, is also very rich in sun. There is a belt that extends from North Africa to western China that has the best sunlight in the world for electricity production out of solar energy. We predict this area will be very attractive for establishing alternative energy structures.

“It is also an area rich in other natural resources such as silica, and this also reflects well on the raw materials needed for the production of chips that are used in solar energy panels, for example.”

Building for the future

Another element that makes the region so interesting in terms of cleantech is that of construction which is seeing US$350bn of investment in 2008 thanks to a fast-expanding population (which currently stands at around five and half million). Projects include the three Palm Islands, the world’s largest artificial islands, and also the building of the Dubai World Central International Airport which, on completion, will be the most expensive airport ever built.

“The boom we are seeing means there is high demand for new materials and clean-tech construction materials. By combining all these elements, you find clean tech to be an attractive opportunity in this part of the world. We need to strike up the right international partnerships and encourage the development of core technologies here so we can maximise our returns,” says Tabaza.

He adds: “I believe there is a record number of cranes and construction equipment placed in Dubai and Abu Dhabi, so it is a huge industry. Many people think the region is seeing the beginning of tremendous growth over the next few years.”

And in the current economic climate, as the US seeks to rescue its troubled banking sector and European shares are on a downward slope as per the end of September 2008, it seems the UAE will continue to shine brightly for private equity investors.