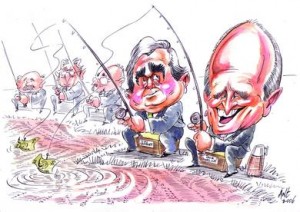 Private equity houses have, for some time now, been attractive places for retired CEOs to keep busy. GE’s Jack Welch and IBM’s Lou Gerstner are both active in the industry at Clayton Dubilier & Rice and Carlyle respectively. But recently there has been a shift as younger, rising stars opt to leave the public scrutiny of listed companies to join private equity types. Gerald Storch, of Target, the US retailer, Millard Drexler, the former presiden of the Gap and Vivek Paul from Wipro, the Indian IT group, have all recently joined private equity firms.

David Calhoun, GEs infrastructure division head, is the latest to leave an empty seat in a blue chip board room. Calhoun left a division with US$47bn in revenue to join VNU, a medium-sized media firm with sales of US$4.5bn, a tenth of the revenues of his previous employers. The Netherlands-based media group is owned by six buyout groups including KKR and Carlyle.

Many CEOs of publicly listed companies seem to be tired of their salaries being debated in the newspapers and the pressure to meet quarterly performance targets.

In private equity, they can earn as much money as they possibly can and not have to justify it to shareholders.

Private equity groups allow talented CEOs to take ownership of their work as they are often expected to invest their own money in the funds or company they work for. It is believed that Calhoun invested a substantial proportion of his own wealth in acquiring VNU shares.

The recent ease of fund raising has also allowed private equity firms to buy bigger companies and big companies need talented, experienced managers. As firms are awash with cash, paying for this talent doesn’t seem to be a problem. Calhoun was reportedly compensated for the loss of US$50m he could have earned at GE and offered another US$50m in equity.

This brain drain will begin to affect public companies, especially as those companies are now plagued by burdens of legislation introduced after the WorldCom and Enron scandals and the Sarbane-Oxley requirements.

KKR says that more than a third of its top 29 managers have experience as chief executives or CFOs of publicly listed companies and this is a trend that reaches across almost every major private equity firm.