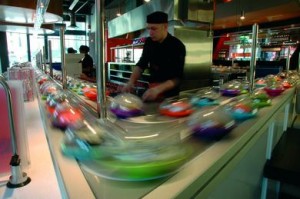 Founded by a former investor on the BBC TV show Dragon’s Den Simon Woodroffe in 1997, now serves three and a half million customers a year. Woodroffe sold a 60.5% equity stake to London-based in August 2003 for around £4.5m as part of a £10m MBO. Woodroffe has now sold his remaining 22% to , with the YO! Sushi management team reinvesting their money and increasing their stake from 17.5% to around 25%.

, which is an arm of Luxembourg-headquartered investment institution Quilvest, has a history of activity in the restaurant sector, including three in the US: Chop’t, a salad chain, OSI Restaurant Partners, a casual dining business, and Pasha’s, another casual eating chain. It also has Pomme de Pain, a French sandwich restaurant brand, in its portfolio.

Axelle Strain, partner at Quilvest, said: “YO! Sushi’s management team have demonstrated a strong track record of profitable growth, and we look forward to working with Robin and his team to build on their successful development. We believe Quilvest is uniquely positioned to help YO! Sushi accelerate its roll out plans in the UK and internationally.”