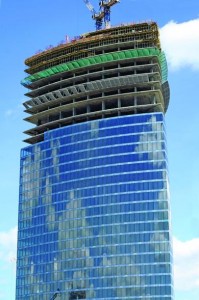 Real estate investors have been investing in Central Europe for the past eight years or so and as these markets begin to perform more like Western European markets because of the ever widening web of the European Union. Investors are developing a healthier risk appetite and taking their money further east. The country that is benefiting most from this expansionist attitude is Russia. The first son of the former USSR is the hottest property market in Europe at the moment. And US institutions such as AIG Global and AIG Lincoln, as well as Deutsche Bank, Downey Day, JPMorgan, Tishman and Hintz are all investing in this market for the first time, according to Eric Rosedale, co-chair of global real estate at Salans.

The most coveted sector in Russia is ‘class A’ office space in Moscow and St. Petersburg. The returns are strong at the moment on this area of real estate because both foreign and domestic companies are looking to open offices in the capital as the Russian economy continues to move into service industries. The rental income stream in Moscow, especially, seems certain as it is very difficult to secure building permission and to see projects through to completion therefore depressing the pace of supply. This trend is in contrast with Central and Eastern Europe where accelerated office building over the past two years has cooled the rental market for ‘class A’ office space in Warsaw, Prague and Budapest.

Russia still has particular political risks but it is beginning to look more like Central Europe in terms of credit rating and transparency. But the country’s legal regime changes rapidly and local law is often in direct contradiction to federal law. It is not only the legal system that is in flux but also the tax system – making it difficult to know exactly what the tax liability of an investment is.

However, according to Rosdale, the risk is compensated for in a market where returns are, on average, two to three times what they are in Central Europe. Therefore, Rosdale recommends that investors keep at least one egg in Russia’s basket.

As Central Europe moves closer and closer to Western Europe, Poland, the Czech Republic and Hungary are seeing the same type of developments. According to Rosedale, the hottest property market in these countries is large-scale residential property. As GDP per capita and the availability of credit for home purchases increases, young adults no longer want to live with their parents until they get married but want their own homes.

As economic growth in Central Europe is outpacing that in Western Europe industrial property is also a good investment here.

According to Rosedale no investment in Europe compares to the opportunities in Russia. But he offers a warning that Central Europe and Russia are not the same investment animal. The business cultures are different and he advises that private equity firms looking to invest in Russian real estate for the first time should put talent on the ground and not attempt this investment by remote control or they risk getting hurt. He says that many will be in competition with foreign institutional investors that have opened regional offices and Russian companies with Russian capital that have informational and cultural advantages.

Looking further east still, India is ripe for investment as it is beginning its development cycle. India shares a common culture, language and business ethic with Western Europe and the US, which Rosedale describes as ‘a nice thing.’ Real Estate investing in the country is in its infancy so all the standard trends of urbanization are beginning to come through, creating a very interesting picture in industry, housing and office space investments. However, India is renowned for being highly bureaucratic with the very fabric of society made up of a maze of laws and administration. Nor is the market fully open yet so there are restrictions to investment and regulations on certain sectors.

The march east for investments is expected to continue and the willingness to increase risk to get exposure to higher returning markets is a trend with traction as there are a lot more institutional portfolio managers willing to assume more risk for higher returns chasing real estate.