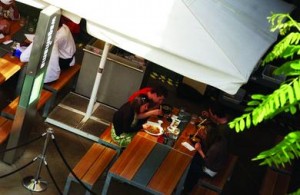 Over the course of the last 12 months, private equity firms of varying sizes have been snapping up eateries all over the UK. acquired , owner of Café Rouge and Bella Italia, in December last year, and is also expected to grace the public markets with its presence with a £500m price tag in the New Year. Blackstone added the Strada restaurant chain to the menu in May, picking up a cheque for £140m, and just missed out on La Tasca, the UK chain specialising in Spanish cuisine, to , the Robert Tchenguiz investment vehicle.

Over €300bn is spent on eating out in Europe, a record amount, according to research by restaurant consultancy firm , with Germany spending €64bn, France €54bn and the UK €44bn. For the UK, the total is expected to rise to €65bn by 2011, meaning that UK households will be spending about third of their income on eating out. Peter Backman, managing director of Horizons, says: “This growth in preferring to eat out rather than cook a meal at home is being driven by hectic lifestyles and the fact that it is often viewed as being cheaper to eat out than buy the ingredients to cook a meal.”

has already benefited from the UK’s appetite by making a 10.2x return on its investment in Wagamama when it sold the business to Lion Capital in June 2005 for £103m. The firm retains a 12% stake, and is expected to sell some or all of this if it goes ahead with an IPO, which will value the business at an estimated £200m, showing just how far the business has come in little over 10 years in private equity hands.

When Graphite first invested in 1996, the company had just two restaurants. When came aboard, this had grown to almost 50. Turnover increased from £2.5m to over £45m, operating profit grew from £0.4m to £5.7m, and plans to expand the brand to the US are underway. Both Graphite Capital and Lion Capital declined to comment for this article.

Gaucho Grill has only been in Phoenix’s portfolio for 14 months but already is looking towards an IPO to cash in on recent investor appetite for UK eateries. Gaucho is looking at a market valuation of £100m and is expecting to raise £50m for itself, with Phoenix’s 45% stake reported to be worth £25m. When Phoenix took over, the chain had a total of nine restaurants in its estate – this has now expanded to 11, with plans to open three more stores in 2008, including a prime site at the O2 arena (formerly known as the Millennium Dome). In the long-term, it plans to open a further 40 new sites, including mainland Europe where it already has a restaurant in Amsterdam.

“Roll-out stories are attractive for investors,” says Hugh Lenon, managing partner at Phoenix. “What we are doing is proving an operating model works and then rolling it out geographically, and this is what makes Gaucho and Wagamama attractive to investors, not just on the public markets but for private equity as well. What’s changed in recent years is these businesses are being run by high-quality management teams whereas perhaps they weren’t a few years ago. They are ready to graduate to the public market.”

Such success is not industry-wide. Backman says that despite media reports, the restaurant sector is not experiencing rapid growth but a more modest 2% above inflation after a period in 2001 to 2003 when the market dipped. It’s a market where consumers have become very price sensitive, and very conscious of being time poor. “Eating out has got to take its place alongside any other leisure activity,” explains Backman.

In response to this, UK restaurant prices have remained somewhat static, and there has been a drive towards cheaper eating. This has made it a very competitive market, prompting the question as to why public and private investors are so interested in it.

“There are some very good players out there”, says Backman. “Wagamama, for example, know what they are doing. They are able to cream off the not-so-good players.”

There is also the property angle which can appeal, although this is more applicable to pub chains than dedicated restaurants, and thirdly there is the ease of setting up a restaurant business. “No matter how badly you run a food service, you are going to have positive cash flow,” says Backman.

The turnaround of the sector as a destination for investment has been dramatic. As Lenon says: “Ten years ago it was very unusual to invest in a restaurant business, but now it’s definitely changed. Blackstone is now an investor in the sector with Tragus, something which you would not have thought a decade ago.”