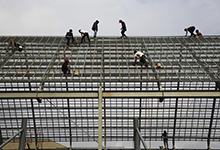 After a unit of Macquarie Intrastructure took control of the South Bay Expressway in San Diego more than a decade ago, the privately funded highway project finally opened for business in late 2007, with sunny expectations tied to rapid suburban growth in area.

But the subprime meltdown and a rise in unemployment impacted new housing developments the highway was meant to serve. Financing for the plan hinged on an estimated 60,000 vehicles per day in 2009, but only 23,000 cars used the expressway daily. With toll revenue falling millions of dollars below projections, the project filed for bankruptcy in 2010.

Similar fates enveloped the Sydney Cross City Tunnel in Australia, the Millennium Park and Grant Park garages in Chicago and others. Meanwhile, Citigroup Inc ended up liquidating its hefty $3.3 billion Citi Infrastructure fund, with the business sold this year to Corsair Capital. And infrastructure specialist Babcock & Brown went out of business altogether.

Those are just a few examples of how infrastructure investing moved into fashion and then quickly lost steam when the assets, which were thought to be recession resistant, proved to be vulnerable to the most extreme economic downturn since the Great Depression.

Despite the track record, GPs and LPs have rekindled their interest in infrastructure, which sometimes overlaps with energy and pipelines. Infrastructure funds can provide a hedge against inflation since toll roads and other cash-generating assets can hike prices if need be. To sweeten the deal for LPs, cash flows paid back to investors may be pegged to increases in the Producer Price Index.

In the low interest rate environment, infrastructure investments may often provide a better return than investing in U.S. Treasuries or other debt. While inflation remains mostly in check, LPs with time horizons measured in decades need to be ready for fluctuations, and infrastructure can help with that.

“When inflation does happen … you have to build a program to have exposure now, rather than when it does kick in,” said Chris Tehranian, principal at LP consultant Meketa Investment Group. “LPs have liabilities of 30 years or more — and inflation ebbs and flows during these longer periods.”

In the last couple years, several multibillion-dollar infrastructure funds have emerged in the fundraising market with generous support from LPs. This scaling up of committed capital is tempered by lessons learned from the era directly following the global financial crisis.

Prior to the crisis, some LPs got into infrastructure without fully thinking it through. “There wasn’t a lot of discussion on how do you create an infrastructure allocation, what it’ll look like, what controls you need, the pacing of investment, the impact of currency changes, how it’ll be benchmarked and the best way to meet these issues,” Tehranian said. Over time, “all of these things developed into program designs” in use now, “and they’re still evolving,” he said.

Wiser LPs remain more sensitive to utilization and refinancing risk in core infrastructure deals, watching for higher levels of leverage and potential uncertainty in the value-added and opportunistic infrastructure strategies that may offer loftier returns.

“The industry has done a good job of splitting up infrastructure by its risk types and focusing on exposures and opportunity sets rather than a one-size-fits-all mandate,” Tehranian said.

LPs typically allocate 3 to 5 percent of their portfolios to infrastructure, more in some cases. On the higher side, the Ontario Municipal Employees Retirement System (OMERS) targets 18 to 20 percent for infrastructure. Sometimes infrastructure is included in a real assets investment program that may also include metals, mining, farmland, oil/gas and timber. Infrastructure may comprise 30 to 50 percent of a real asset portfolio.

Use of separate accounts for big LPs remains popular, along with a greater focus by funds offering access to specific sectors and geographies, such as lower-cost oil fields that generate returns at today’s lower commodity prices.

The build-up of oil and gas offers investment opportunities in Ohio, North Dakota and Pennsylvania in terms of pipelines and gathering systems. Power generation is another place to put money as the United States shifts toward natural gas and away from coal. Renewable energy investments also remain in the mix, including wind and solar power.

Public-private partnerships (P3s) — projects funded by a combination of public and private capital — remain popular in emerging markets and elsewhere overseas. Traditionally, big U.S. public works projects have instead been financed by tax-free municipal bonds, instead of P3s, but some are still around. Those projects include the $2.1 billion Midtown Tunnel project in Virginia with financing from Skanska Infrastructure Development and Macquarie Group; the $3.6 billion LaGuardia Airport Central Terminal Building Replacement project led by Meridiam Infrastructure, Skanska USA and Vantage Airport Group; and the $1.5 billion Goethals Bridge replacement to connect Staten Island, New York, with Elizabeth, New Jersey, with backing from Macquarie Infrastructure, Real Assets Inc and project contractor Kiewit Development.

Looking ahead, the Gateway project to build a new railroad tunnel under the Hudson River for Amtrak and New Jersey Transit could end up using a combination of public and private money, although it’s still early in the planning stages.

Among major M&A deals in the space, IFM Investors paid $5.7 billion, including $3.2 billion in equity and $2.5 billion in debt, for the Indiana Toll Road, and Global Infrastructure Partners paid $2.7 billion for a 50 percent interest in Hess Infrastructure Partners for pipelines and other assets in the Bakken Shale of North Dakota and Montana. Meanwhile, Macquarie Group and Ferrovial SA’s Cintra unit put the Chicago Skyway on the selling block this summer.

Buyouts identified 28 funds with the word “infrastructure” in the title that have raised $22 billion in commitments since the start of 2014.

During the second quarter, Kohlberg Kravis Roberts & Co closed its KKR Global Infrastructure Investors II with $3.1 billion in commitments, about triple the size of its $1.04 billion debut infrastructure fund.

Even if a pool doesn’t have the word “infrastructure” in it, a fund may invest a portion of its capital into those types of assets. This summer, for example, Fire & Police Pension Association of Colorado re-upped $20 million to Raven Capital Management’s latest debt fund, Raven Asset-Based Opportunities Fund III, which is targeting $350 million. The GP focuses on special situations in infrastructure, along with transportation, commercial finance and intellectual property.

Among the largest LPs, infrastructure appears to be boosting returns. The California Public Employees’ Retirement System’s real assets allocation, which includes real estate, infrastructure and forestlands, netted a 12.4 percent return in 2015 as of June 30, well ahead of the retirement system’s 2.4 percent return on its total investment portfolio.

And more big players may be wading in. Norway’s $880 billion sovereign wealth fund is mulling future investments in infrastructure, including renewable energy.

“You have an asset class that matches the investment objective for the world’s largest LPs,” Moser said. “These are investors that want to put money out and keep it out in a stable and — at best — an inflation-protected asset, for a very long time. It’s an … asset class that rings many of these bells.”

As a middle-market player, Aquamarine plans to avoid getting in line for the relatively few P3s available in a given year and instead focus on transportation shipment facilities, assets around ports, electrical transmission, distributed solar, smart grid and integrated urban transportation, such as charging stations for electric cars.