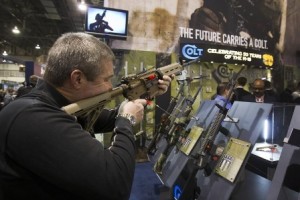 A Colt lawyer also told U.S. Bankruptcy Judge Laurie Silverstein in Wilmington, Delaware, that the gunmaker planned to sell itself to its current owner, Sciens Management, and wipe out $250 million of bond debt. However, he also said bondholders had proposed an alternative plan that was being reviewed.

Colt Defense filed for Chapter 11 bankruptcy on Sunday, after a year of sharply falling sales and dwindling cash that made it hard for the company to meet demand for its sports rifles and handguns.

A bondholder attorney told Silverstein that Sciens was to blame for Colt’s inability to compete.

“What do they [Sciens] do with the cash? They take it for themselves,” said Robert Stark, of Brown Rudnick, which represents a group of large bondholders. “There is no corporate governance here. There is only Sciens.”

Colt had planned to use the hearing to seek approval to borrow $20 million from its current lenders. John Rapisardi, an attorney with O’Melveny & Myers, which is representing Colt, said the company needed cash to make Wednesday’s payroll.

Just hours before the hearing began, Stark’s group presented the company with its proposal for lending Colt desperately needed money. Stark wanted the judge to order Colt to accept the proposal, which he said was more favorable towards Colt.

Silverstein approved an interim loan to carry the company for the coming days and scheduled a hearing on Monday on the bondholder loan proposal.

Colt has said it needs to quickly get out of bankruptcy to reassure customers such as the U.S. government that it remains a viable provider of weapons. To overhaul its debt quickly, it has proposed selling the company to Sciens, essentially setting the price at zero dollars. Colt would exit bankruptcy much as it is today, but without its bond debt.

“This one is a bit odd,” said Rapisardi, describing the proposed sale. He said if the court rejects the company’s plans and it is forced to accept the loan from the bondholders, Colt may end up with a traditional Chapter 11 turnaround rather than a sale.

(Reporting by Tom Hals of Reuters)