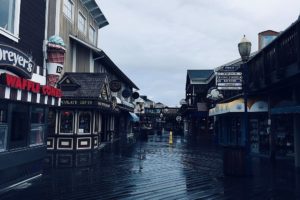 Staring out the window of his Manhattan apartment, the placement agent could see people jogging along the street.

“That’s going to come to an end soon,” he said, with a hint of resignation in his voice. He was referring to a potential shelter-in-place policy many New Yorkers were expecting in the next few days.

Our conversation was on private equity fundraising, and the placement agent was being fairly optimistic. The coronavirus-related economic chaos was a blip, he reasoned, because once a vaccine was developed, or as soon as the outbreak began to slow down in the US, the pent up demand of consumers and businesses would be unleashed.

“The huge difference between this and every other crisis is that this is a global, non-financial-related blip. The demand is there and as soon as we’re allowed out of our houses, everyone is going to start spending,” the placement agent said. “It’ll be insane.”

The placement agent’s view was one of the most optimistic I heard over a week of talking to every source I could think of. Others had similar feelings, but not quite so cheery. Some seemed to be hunkering down for an extended period of uncertainty.

All agreed that private equity fundraising, at least for the present, was going to slow down, save for the most in-demand funds already in the market and close to closing. Those funds would likely squeak over the finish lines.

Others though, were in for a rough ride. Prevailing wisdom is that funds in market or just coming out would have to add another three-to-six months on top of their fundraising schedules. This is because limited partners, like most other professionals around the world, are restricted from traveling.

And, as public markets crater, LPs will be reassessing their portfolios and their allocation levels. First-time funds were likely out, for now, and emerging managers without extensive GP relationships were going to struggle to gain commitments.

“If you’re trying to launch now, you can’t get meetings with anyone,” said Kelly DePonte, managing director at placement agency Probitas Partners. “You can send a PowerPoint off to their home address… the whole process is slowing significantly.”

This is going to be a different reality for private equity, where last year funds raise more capital than any time in history. US private equity and mezzanine funds raised about $310 billion in 2019, according to PEI data.

Several LPs sitting at home said they were still taking video conferences with GPs and continuing to commit to private equity. However, for many GPs, fundraising timelines have started to slip.

“A lot of GPs were raising with the assumption that they would close a few more deals over the spring/summer and there’s good reason to think that won’t happen,” said an LP with a large public pension.

Generally, funds are contractually obligated to stop raising a new fund 12 months from that fund’s first close. For many funds, those schedules have been blown apart by the market chaos spurred by the spread of coronavirus around the world.

LPs, unless they’ve already granted a fund an extension, likely won’t have an issue giving GPs more time to raise, sources said. Fundraising extensions could involve negotiations, the LP said. “For the most part, fundraisings at the tail end will get done or close to done.”

There have been only a few extreme cases – likely to grow as the downturn persists – of LPs about to close on commitments to funds who have pulled back, sources said. “Their CIO suddenly put a freeze on activity,” an LP told me.

“If it’s a manager that was oversubscribed, they’ll probably be able to find some substitute capital,” the LP said. “If not, you’ll see the GP close on as much as they possibly can and lock that down… maybe they’ll extend their timeline to fill the allocation.”

As public markets continue to teeter, LPs are growing more concerned about the dreaded denominator effect. This was a phenomenon that arose in the global financial crisis, when public markets collapsed, driving down the total value of LP portfolios like pension funds.

In this case, illiquid assets like private equity stayed at the same level driving up their percentage of the total fund, sometimes beyond legislatively mandated allocation levels.

This phenomenon could come back depending on how far public markets fall and how long the pain lasts, sources said. “There are a number of LPs that are stressed by that, asking if they’ll have anything left to invest,” DePonte said.

To bring allocations back in line with mandated levels, some LPs stopped committing to private equity for a time and missed out on some of the best performing vintages directly after the global financial crisis.

There are some differences now. For example, some pension systems have moved private equity into an overall “equities” category, giving the program more flexibility for movements of allocation levels.

“The denominator effect has been losing its potency over the years as investors have come to realize that it usually forces them to cut back on PE/sell PE funds at precisely the wrong time,” said David Lanchner, managing director of Lanchner Communications.

“Growing numbers of LPs now allocate according to strategy buckets that make no difference between public and private equities. When they decide to overweight or underweight these baskets they do so overwhelmingly through the purchase and sale of public securities.”