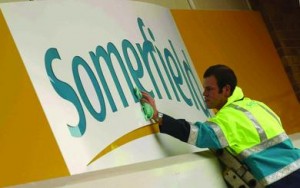 owners , and property entrepreneur Robert Tchenguiz are happy with the way buyout negotiations are progressing with the .

It has been reported that the vendors have accepted a bid of between £1.6bn and £1.7bn for the supermarket chain. Such a price tag would be significantly below their expectations of £2bn to £2.5bn and also less than the £1.9bn lowest acceptance price reported in the press as recent as earlier this week.

However, sources close to the deal have confirmed that although talks are going well the Co-op still has a considerable amount of due diligence to get through before a final offer is made.

Discussions are still centring on a number of stores that will have to be sold due to competition issues. Last month, Somerfield agreed to sell seven outlets to Tesco for a reported £100m. However, it was also reported that Somerfield was opening three new stores in Hove, Bristol, and Hopton-on-Sea as part of its ongoing store investment and regeneration programme.

These stores are part of the 250 that the company plans open over the next three years. A further 200 existing stores are scheduled for refitting over the next 12 months, in addition to Somerfield’s £100m investment in regenerating 250 stores over the past year.

Although Somerfield has already had to lower its price expectations, those close to the deal argue that a good price will still be received for what is effectively a defensive business and, like all private equity firms in the present climate, the consortium is under pressure to return money to investors.

Consortium members are also keen to stress that the process has not been driven by Robert Tchenguiz, who has been widely reported to be driving the sale after making losses on investments in rival supermarket chain J Sainsbury and pubs group Mitchells & Butler.

The acquisition would make the Co-op the UK’s fifth largest grocery retailer. Somerfield is being sold through a process run by , which is believed to have attracted interest from ASDA and Marks and Spencer. Somerfield was delisted by the current owners from the London Stock Exchange for £1.1bn in 2005 and has been for sale since last summer.