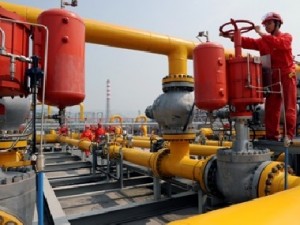 “We have placed the ratings on Samson on CreditWatch with negative implications, reflecting that we could lower the ratings if the company is unable to enter into agreements to sell,” S&P said.

The ratings agency expects the Tulsa, Oklahoma-based company to have weaker credit measures because of its high exposure to weak natural gas prices, coupled with the cost challenges of increasing production of more lucrative hydrocarbons such as oil and natural gas liquids (NGL).

“While the company is looking to sell assets, we believe it could face difficulty in realizing a sizable amount of proceeds to address liquidity and leverage issues,” S&P analyst Stephen Scovotti said in a note to clients. “Under our 2015 natural gas price assumption of $3.75 per thousand cubic feet, we expect that cash flows and profitability will continue to be weak without successful growth in oil and NGLs.”

The company is considering the sale of its Bakken and San Juan holdings, S&P said. The ratings agency said it has not included the potential effects of divestitures in its forecasts.

“The company could cut capital spending significantly beyond our assumptions if it needed to preserve liquidity,” S&P said. “We expect the company to fund any outspending with borrowings on its revolving credit facility and potential asset sales.”

S&P expects funds from operations to debt of about 8 percent and debt-to-EBITDA of about 7x by the end of 2015.

On December 19, S&P lowered the corporate credit rating on Samson Resources to B- from B. Debt with a B rating is more vulnerable to adverse business, financial and economic conditions but currently has the capacity to meet financial commitments, according to S&P ratings definitions.

The ratings agency cut is view on the company’s revolving credit facility to B+ from BB-, its second-lien debt to B- from B, and its unsecured notes to CCC from CCC+. The CCC rating means a company’s debt is currently vulnerable and dependent on favorable business, financial and economic conditions to meet financial commitments.

An investor group including Kohlberg Kravis Roberts & Co, NGP Energy Capital, Crestview Partners and Itochu Corp announced the purchase of Samson for $7.2 billion in 2011. A spokeswoman for KKR declined to comment on the debt downgrade, as did a spokesman for Crestview. Spokesmen for Itochu and NGP could not be reached for comment.