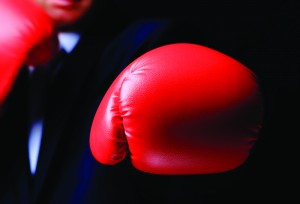 S&P projected a debt-to EBITDA multiple of 9x at year-end 2015 for Samson, a significant jump from its December estimate of 7x debt-to-EBITDA by the end of this year.

One upside scenario could come if the company improves its balance sheet by divesting part of its business, S&P said. But demand for such assets remains slack in the face of low oil prices. Brent crude oil has bounced back from a low of $50 per barrel to above $60, but that is still well below the $100-plus price it fetched for most of last year.

“We believe (Samson) could face difficulty in realizing sufficient proceeds to address liquidity and leverage issues, given the weak commodity price environment,” S&P analyst Stephen Scovotti said. “Under our 2015 natural gas price assumption of $3.50 per million BTU, we expect that Samson’s cash flows and profitability will continue to be weak in comparison to other, more oil-weighted, exploration and production companies.”

S&P cut its corporate credit rating on Samson to CCC+ negative from B- watch negative. The latest designation means the firm is currently vulnerable and dependent on favorable business, financial and economic conditions to meet commitments, according to S&P ratings definitions. The negative outlook reflects its expectation that liquidity could deteriorate over the next 12 months.

Analysts also cut Samson’s revolving credit facility to B from B+, its second-lien debt to CCC+ from B-, and its unsecured notes to CCC- from CCC.

KKR has been moving to increase more lucrative oil and liquids production at Samson, but low fuel prices have hampered this effort, Reuters reported.

Meanwhile, beaten-down returns from the energy sector took a bite out of quarterly results from KKR and other big buyout shops.