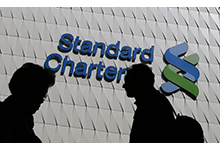 The 57-year-old, who was one of four executives on the board, will step down at the end of April after 13 years at the bank.

“I’ve been toying with the idea because I started the private-equity business here after I joined Standard Chartered,” Shankar said in an interview with Bloomberg. “It would be reasonable size deals and focus on the markets that I’m intimately familiar with, both from Standard Chartered and Bank of America, which is essentially Asia, Africa and the Middle East.”

Shankar said new fund will target an initial fundraising “somewhere in the range” of $1 billion, though the plans are at an early stage and the fund won’t open it until he leaves the bank, Bloomberg reported.

Standard Chartered also said Jonathan Paul will become head of financial markets, and Sumit Dayal will take over as head of corporate finance, both based in Singapore.

Mark Dowie, who has run corporate finance since 2011 and been acting head of financial markets for a year, will become vice-chairman of clients and products, moving back to London.

Dayal has been at Standard Chartered for 11 years, including as head of leveraged finance and equity capital markets.

The new appointments are the latest in a string of changes at Standard Chartered after two years of falling profits raised concerns it had lost its way.

A trio of senior managers left last year, and in February the bank said Jaspal Bindra, CEO of its Asia business and three long-standing directors were stepping down.

Standard Chartered’s London-listed shares were up 0.4 percent at 0910 GMT.