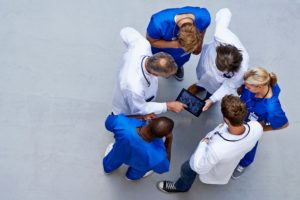 RiverGlade Capital, launched by the former heads of Sterling Partners’ healthcare group, is in the market with a second healthcare buyout offering.

Fund II’s rollout comes about two years after the close of RiverGlade’s inaugural fund. It secured $325 million, ahead of an original target size of $300 million.

Emerging and incumbent managers are both contributing to vigorous, and possibly record-breaking, North American healthcare PE fundraising in 2021.

Over the first three quarters, 105 healthcare vehicles collected more than $100 billion, up 14 percent from the $88 billion brought in during the whole of last year, PEI data show. At this level of activity, fundraising may be poised to top the all-time record of $123 billion obtained in 2019.

RiverGlade was established in 2017 by managing partners Garrick Rice and Danny Rosenberg, who previously oversaw Sterling’s healthcare services investing practice. Rice was with Sterling for almost 16 years, and Rosenberg, for just over 18 years.

The pair set up RiverGlade to mostly acquire control stakes in lower mid-market healthcare services businesses, according to the firm’s ADV filings and website. Companies are typically founder-owned and have EBITDA of $5 million to $15 million, differentiated offerings and proven organic growth.

Dealflow is sourced across healthcare verticals and with a focus on multi-unit, outsourced service, tech-enabled and product and distribution business models.

RiverGlade writes checks of $20 million to $80 million per platform deal. Along with control investments, it will make growth equity investments on a selective basis.

In November, RiverGlade announced the sale of a control interest in US Oral Surgery Management to Oak Hill Capital. Formed in 2017 in partnership with Thurston Group, USOSM is a healthcare management services company to the oral surgery sector.

Rice and Rosenberg manage a team of 12. Two professionals, Natalie Greene and Dan Skowronski, were this year promoted to principal. Greene joined in 2017 from Sterling, while Skowronski came onboard a year later from Edgewater Funds. The investment group was also expanded to include Kevin McGrath, hired from Jackson Private Capital as vice president.

RiverGlade declined to provide a comment on this story.