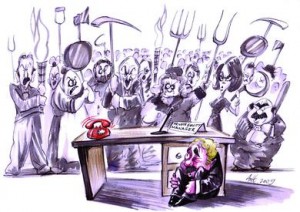 Worst, that is, in relation to deal flow and exit opportunities. There was another sentiment simmering away underneath all the PowerPoints and canapés: LP anger. Whilst I’ve obviously been aware of it before, it wasn’t until SuperInvestor that I’d really acknowledged the extent of just how much resentment there had really been.

It came up a number of times in the big panel discussions, and dominated a number of the themes, all saying, quite clearly, if not particularly aggressively, that investors were, to put it politely, displeased with the behaviour of their GPs over the last few years. Combine this with the wry smirks that accompanied GPs spouting off about partnership in times of trouble, and it all makes for a rather interesting 2010, for this displeasure is set to come to the fore when private equity hits the fund raising trail next year.

One LP asked during the Q&A following a panel discussion on the future of mega-buyouts whether all this talk of partnership is just because GPs are having a hard time of it, with the not-so-subtle implication that they didn’t give a damn about it during the boom years.

CVC’s senior partner and panellist Marc St John took the question, answering that at every conference he’s been to recently, at least one person has, with “righteous indignation”, asked a similar question. “LPs and GPs both knew what they were doing, which is why there is anger.”

This idea of complicity was a common theme. Speaking to a senior member of a secondaries firm over lunch, I was told that the main reason LPs are so angry is that they know they were partly at fault for agreeing to aggressively pro-GP LPAs. “They were lemmings,” he said.

In order to avoid such failings next time around, more and more LPs are referring to the ILPA principles, a set of best practice guidelines published by the Institutional Limited Partners Association (ILPA) in September. We’ve been here before of course, with the Mercer Guidelines in 1998, which set out to do a very similar thing but were quickly forgotten as they came out just before a fund raising boom.

The ILPA principles should have a different effect coming out just after a fund raising boom, but it still remains incumbent upon the LP to ensure they fight for their rights. LPs have more power now than they did three years ago, but that can quickly change unless they remain on the ball and not allow themselves to be ridden over roughshod by GPs.

Also, an antagonistic attitude fuelled by resentment won’t help anyone. As John Singer said on the mega-buyouts panel: “Righteous indignation can be very unpleasant. The LP/GP relationship is symbiotic. It’s like being in a family and you have to be able to get back together.”