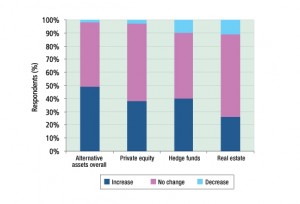 If private equity limited partners are supposed to be long-term investors, they nonetheless pay close attention to market conditions, according to a new survey of institutional investors by secondaries firm .

On the one hand, far more of the LPs canvassed in the survey said they planned to increase their exposure to private equity in the coming year than did the percentage of LPs that said they would decrease their commitments—some 40 percent versus less than 5 percent. This would seem to indicate that LPs have long-term confidence in the asset class.

On the other hand, three quarters of institutional investors said they were concerned that strategy drift by general partners would diminish returns, according to Coller Capital’s most recent semi-annual report. The recent credit contraction has dampened buyout firms’ ability to put their substantial war chests to work, and many shops have veered into new strategies such as credit funds and infrastructure and new parts of the world such as Asia and South America.

The LPs most acutely worried about general partner style drift are located in North America. More than 80 percent of those LPs said they feared private equity firms, including venture capital firms, run the risk of diminishing their future returns. This is the first time Coller Capital has asked survey participants about style drift.

Perhaps not coincidentally, mega-firms are in almost every case the same shops that have diversified their menu of products and expanded around the globe. And LPs put mega-buyout funds (defined as $5 billion or more) at the bottom of the LBO heap, expecting better results from lower mid-market buyout funds, mid-market buyout funds, growth equity specialists and even mezzanine funds, according to the survey. For the record, 70 percent of the LPs surveyed said they expect mezzanine funds to return between 11 percent and 15 percent.

Still, even if LPs are generally lowering their return horizons for buyouts funds, they are still committed to plowing money into the asset class, according to the survey. If nothing else, that suggests a positive long-term outlook for private equity, coupled with a less sanguine view of other assets groups, Morgan said. Moreover, despite growing skepticism about the 2006 and 2007 vintages of buyout funds, newly raised vehicles could take advantage of favorable pricing brought on by the credit crunch.

“‘Where else am I going to put this money if I have questions about real estate and public equities?’” Morgan said, channeling the voice of LPs. “Paradoxically, this may be a good time to invest.”

At the same time, an overwhelming swath of LPs—80 percent—said they expect sovereign wealth funds would strike “significantly more” strategic partnerships with private equity firms in the coming years. Those partnerships would likely mimic 2007 deals such as ’s sale of 9 percent of its general partnership to the Abu Dhabi Investment Authority and China Investment Corp.’s purchase of a stake in the management company of The .

Coller Capital conducted its survey of 103 institutional investors in March. About 41 percent of respondents were located in North America, another 40 percent in Europe and 19 percent in Asia-Pacific. Respondents from public pension funds, insurance companies, corporate pension funds, investment banks, endowments and foundations made up the bulk of the participants.