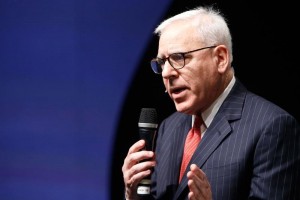 Shares of Symantec, which also reported lower-than-expected quarterly revenue and profit, rose about 2.5 percent in premarket trading on Tuesday.

Symantec bought Veritas for $13.5 billion in 2005 to add data storage and management to its enterprise offerings.

Revenue from Symantec’s information management business, which accounts for nearly 40 percent of the company’s total revenue, fell 10 percent in the first quarter.

The software maker said it expected about $6.3 billion in net cash proceeds from the sale, expected to close by Jan. 1.

Reuters reported earlier on Tuesday that Symantec would sell Veritas to Carlyle.

Symantec, whose software comes bundled with PCs, posted its fourth straight quarter of falling revenue on Tuesday, mainly due to sliding PC sales.

Symantec forecast an adjusted profit of 40-43 cents per share and revenue of $1.49 billion-$1.53 billion for the second quarter.

Analysts on average were expecting earnings of 45 cents per share and revenue of $1.54 billion, according to Thomson Reuters I/B/E/S.

Analysts on an average had expected a profit of 43 cents per share and revenue of $1.53 billion.

Symantec also raised its buyback program by $1.5 billion to $2.6 billion.

The company’s shares were trading at $23.48 before the bell. Up to Monday’s close, the stock had fallen about 7 percent in the past 12 months.

(Reporting by Lehar Maan and Abhirup Roy in Bengaluru)