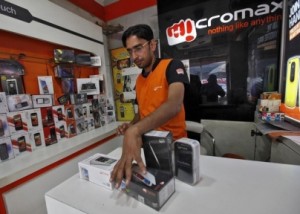 Those talks were about the sale of a 20 percent for up to $1 billion, two people had said, which values the Indian company at around $5 billion.

Vikas Jain declined to confirm any ongoing talks but said the company was also open to the option of an initial public offering of shares possibly on a local stock exchange.

“As we talk, both the options remain open. We have various i-bankers who have approached us with either of the options and we’re given to understand that there is sufficient amount of interest in Micromax,” Jain told Reuters in an interview.

Micromax, which entered the Indian handset market in 2008 with cheap large-screen phones, had hired banks in 2010 for an IPO to raise as much as $150 million but scrapped the plan a year later, citing poor market sentiment.

Micromax, which launched its Canvas Laptab personal computing device on Thursday making its entry into the new segment, aims to position itself across “screen sizes” as the number of Internet users in India rise rapidly, Jain said.

Though the company makes about 90 percent of its revenue from phones, it plans to ramp up its non-mobile offerings including tablets, televisions, and 10-to-15 inch devices like the Laptab in the PC segment.

The company produces about a million units of all devices a month from its facility in northern India and should be able to double capacity within this financial year ending March 2016, he said.

While Jain did not give any financial details, he said that the company expects a 50 percent growth in annual sales and is profitable.

Micromax plans to enter “at least two new markets” in this financial year, he added, without giving details.

(By Nivedita Bhattacharjee and Aman Shah; Editing by Sumeet Chatterjee and Elaine Hardcastle)