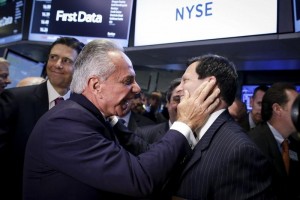 KKR finally took First Data Corp public on October 15 after buying the credit card payment processing company for $29 billion back at the height of the buyout industry’s big-ticket craze in 2007.

Returning to the public markets eight years later, First Data priced its IPO at $16 a share, a fairly large reduction from its estimated price range of $18 to $20 a share, during a volatile fall season for equities.

Despite crosswinds in the market, First Data held its own three weeks into its life as a newly public company with its stock trading at $17.08 a share on November 6, giving it a market cap of about $15 billion.

That valuation amounts to about 6x EBITDA for First Data, based on its annualized and adjusted EBITDA of $1.3 billion for the first six months of 2015.

That’s pretty low compared to average U.S. buyout prices of 10x or 11x EBITDA nowadays. But First Data isn’t your typical deal. It ranks as one of the largest LBOs of all time, and the company still carries a hefty debt load of $21 billion.

With the cash injection from the deal, First Data brought its leverage level down to about 7.1x EBITDA, when factoring in proceeds from its IPO used to pay down debt, according to estimates from Fitch Ratings.

Leverage could fall under 6x EBITDA by the end of 2017, which would likely lead to another upgrade. Fitch’s raised its overall outlook for First Data from stable to positive on October 21.

Cerberus Capital seemed set for a fairly rapid turnaround of its Albertsons buyout with an IPO of the retail supermarket chain in early November.

Cerberus acquired Albertsons stores in its 2013 buyout of Supervalu. It then bought Safeway in February for $9 billion and merged it with Albertsons. The combined company disclosed an estimated second-quarter adjusted EBITDA figure of $570 million, up sharply from $217 million, with the addition of Safeway stores and improvements in store operations.

On October 2, Albertsons set an estimated price range of $23 to $26 a share, with an estimated total shares outstanding of 475.14 million shares after the IPO.

At the $24.50 per share midpoint, Albertsons projected a market cap of $11.6 billion. At that price level, Albertsons would have gone public at a multiple of about 5.1x annualized EBITDA of $2.28 billion.

While the deal may have offered a modest valuation and potential growth, the IPO market didn’t seem particularly receptive to another supermarket name, so the deal got pulled off the calendar.

As 2015 plays out in financial markets, rate-hike fears and jitters around tempered growth expectations in the macro economy continue. Deal prices on the table may face cuts.

Sponsors priced out of market

Although deal prices ebbed in commodity- and energy-related businesses, expensive valuations in tech, consumer, and many pockets of the industrial sector kept sponsors mostly on the sidelines in the booming M&A trade.

Strategic M&A comprised 95.9 percent of the total $1.71 trillion in U.S. activity as of October 27, according to Thomson Reuters. That’s the highest percentage of the total M&A pie for strategic players since 2009.

Looking on the flip side of those numbers, private equity’s biggest chunk of the overall M&A pie came in the peak year of 2007, when sponsored LBOs comprised 22.3 percent of all activity. PE’s share remained low for the next two years and then hit an interim peak in 2013 with 11.8 percent of deals.

Applying a deal-price lens to the results, buyout kings out-muscled strategic players more often during the go-go years of private equity when high buyout prices didn’t necessarily scuttle deals. After the crisis, sponsors felt more bullish about paying winning prices in 2013 than corporate buyers, but then dialed it back in the wake of frothier prices in 2014-2015.

It’s worth noting that from 1996 to 2004, private equity’s share of overall M&A activity ranged in the low-single digits, close to where things stand now.

Photo: First Data Board of Directors Vice Chairman Joe Plumeri (L) and Chairman and CEO Frank Bisignano speak on the floor of the New York Stock Exchange after the company went public on October 15, 2015. REUTERS/Brendan McDermid