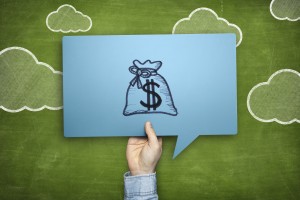 The buyout firm said April 18 it would pay $36 a share cash, or 70 percent over Cvent’s closing price over the prior 30 trading days, to take the company private. That’s a pretty big premium nowadays, but there’s more.

The deal values Cvent, a specialist in cloud-based business-event-management software, at 44x its estimated 2017 Ebitda of $37.14 million. That’s the headline purchase-price multiple based on estimates in a survey of analysts by Thomson Reuters.

The multiple may be lower, however, when factoring in any positive adjustments to Ebitda that Vista Equity worked out internally prior to announcing the deal.

Nor does it reflect any cost savings that Vista Equity may expect once the take-private deal closes as expected in the third quarter. The firm hasn’t shared any of those figures publicly.

Prior to the deal, Cvent shares fell to about $20 from about $35 at the start of the year. So Vista’s buyout price of $36 a share values the company about where it was just a few months ago.

Growth companies tend to fetch higher prices and Tysons Corner, Virginia-based Cvent offers that. Based on analyst estimates, the company is expected to increase its annual Ebitda by about 30 percent from 2016 to 2017, with a 22 percent rise in revenue over the same period.

Again, these figures were projected prior to Vista’s ownership.

Vista declined to comment and Cvent didn’t answer emails about the pricing on the deal.

A source familiar with Vista said Cvent’s multiple appears high partly because the company’s earnings have been hindered. In December, the company warned of wider-than-expected losses related to the divestiture of its consumer ticketing business to Vendini Inc. Its stock price fell sharply in the early-2016 selloff in equities and hadn’t recovered until Vista’s buyout offer.

Vista plans to take the company to a 45 percent Ebitda margin, comparable to where it runs other companies, the source said.

Hinting at the company’s potential, Brian Sheth, co-founder and president of the firm, said Cvent CEO Reggie Aggarwal has positioned the company for “expansion in a large and underpenetrated market,” according to a prepared statement.

So while a 44x Ebitda deal may seem pricey, buyout multiples for tech-flavored firms with growth potential may be worth it, especially if a firm has a solid plan to accelerate the business further. Time will tell.

Residential-mortgage-backed securities, which mostly died off in the wake of the global financial crisis, have returned.

In the largest European deal in the space in nearly a decade, Cerberus Capital Management is floating an estimated $8.8 billion in new bonds backed by the ex-Northern Rock mortgage portfolio called Granite and other assets.

The offering, Towd Point Mortgage Funding 2016-GR1, was expected to wrap up by the end of April. It ranks as the largest sale of asset-based debt in Europe since the GFC.

The sale tipped the scales as the largest ever disposal of assets by the British government, according to reports. The purchase price of the portfolio wasn’t disclosed.

Shortly after winning the deal, Cerberus sold nearly $5 billion of loans from Northern Rock to TSB, a British bank acquired last year by Sabadell of Spain.

Much of the rest of the portfolio is now in the debt market as Towd Point Mortgage Funding 2016-GR1.

Olga Gekht, senior credit officer with Moody’s, said the debt market hasn’t seen many deals tied to legacy assets from the years before the global financial crisis. But overall, Moody’s sees other residential-mortgage-backed securities coming in the pipeline.

“We are seeing other issuances with new assets originated by specialist lenders,” she said.