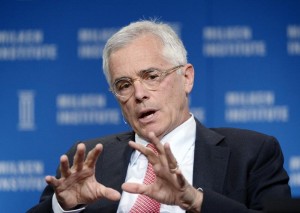 What drove the performance of Fund V?

Well it was a tough vintage and what you basically had to do was sort of deploy it at the right time. In the heady days before the crash, avoiding the big uglies – we don’t need to talk about those. We all know which ones those were. We weren’t doing any club deals back then. We were staying away from those, essentially keeping our powder dry. We bought a really good one down here in Dallas, The Container Store. But after the crash, that’s when we got aggressive. The Container Store is run by a guy by the name of Kip Tindell, and his roommate in college was John Mackey, the fellow who founded Whole Foods.

Whole Foods had a very large pipeline of commitments to open new stores and he was nervous about his ability to fulfill those commitments. He talked to his good friend Kip, complaining about how he’d have to go to Wall Street and have to talk to private equity guys or raise some capital.

And Kip told him, ‘Talk to our partners, they’ve been great through this downturn.’ We cut a deal (with Whole Foods) in a week, we did due diligence in four weeks and we’ve made 5x on our money on that one.

How else did the Whole Foods deal show off your special sauce as a firm?

As large a firm as we are – in part because we’re single-focused and because the managing partners of the firm believe themselves to be investors and not managers of investors – we’re pretty nimble. We can move quickly. We can make large commitments. We don’t have big committees to push things through when everybody thinks the sky is falling. That’s why we were sort of able to get more money out and more attractive assets at a time when a lot of people were pretty nervous.

Fund V started in a frothy time in 2007. Are we in a credit bubble right now?

Yes. Historically speaking by any kind of measure there is a bubble in the debt markets. The protocols that we’ve seen – this is probably dating back six months – were as bad as they were before the crash. Since then, things have tightened up quite a bit, particularly in the second-lien market, with a several hundred basis point change in second liens. Interest rates are sort of unprecedented with the Fed Fund Rate near zero. Everything ratchets off of that. That’s what’s pushing up pricing on what I’d call the second tier assets.

Does this environment make you nervous?

We’ve been doing it forever. Green Equity Investors V, our 2007 fund, was about half deployed during the same type of environment. We invested $5 billion. We returned $5 billion in cash and we still have $5 billion in value left.

We sort of see a continuation of that going on right now. This environment doesn’t scare us. People talk about the deal market. It’s not really a deal market. It’s a market of deals. As long as you pick the right kind of deal you’re gonna do fine. We think we’re as good as you get at that.

Turning to more recent transactions, one of your announced deals includes Mister Car Wash in August.

We’re very excited about Mister Car Wash. That doesn’t sound like a particularly exciting business, but again it’s a distributed distribution model. It’s an extraordinarily challenging business from the perspective of labor management, as you can imagine. If it rains, no one washes their car. If the sun’s out on a Saturday, you get lines. We’re the largest in North America. We own 134 car washes and there are 10,000 to buy. We buy them at 4x EBITDA. That’s a business we like. What we buy is growth. In the case of a company like Mister Car Wash, we know where the growth is coming from. The company is performing well and its prospects are great.

And you bought PSSI from Harvest Partners in December, a time of competitive auctions. What kind of price did you pay?

It’s a company that cleans up protein plants or meat-producing plants. It’s an outsourced service business. It’s growing. It’s more efficient for Tyson Foods to pay somebody else to clean their plant up. And it’s something that they absolutely have to do. It has to be done and it has to be done right. So this is a business that has 25 uninterrupted years of growth and very high free cash flow. We don’t know what next year is gonna be, but based on the last 25 years it’s probably gonna be higher, and the year after that it’s probably going to be higher still. What we’ve generally found – and this is the way we’ve invested through our whole careers – is price never makes a bad deal a good deal. It rarely makes a good deal a bad deal. What you buy is a heck of a lot of more important than what you pay. In this environment, we’re delighted to pay the price that it takes to own a company as good as PSSI.

What were the dynamics that allowed Leonard Green to win PSSI and other transactions?

There’s a lot of magic in how you do that. For what we’re interested in, which is a market-leading company with a great management team that’s getting the job done, a lot of what goes into it is what management wants to do. So we spent a lot of time with Harvest to understand their objectives. And we spent a lot of time with the management team at PSSI. They were interested in a group like ours that is low touch, that buys quality companies, where they could call any manager we’ve ever done business with and get a good reference on us.

Blackstone and Carlyle are talking about longer-lived, lower-risk, lower-return funds. What do you think of that and does it make sense for your firm?

Velocity of money tends to be a good thing for people in our business. You have more frequent carry. But for certain companies it really does work well and it’s sort of the right model.

We’re not going to do a fund of that nature. We’re not contemplating it right now. It’s not on the radar screen. We manage one fund at a time and we sort of do the best job we can managing one fund. But occasionally you get those great franchise businesses and you sure hate to have to sell them early.

For us, there’s a company we own today called Jetro Cash & Carry Inc (a wholesaler of goods for independent restaurants under the Restaurant Depot brand). Jetro’s a business we bought in 2004. Just to give you a statistic about Jetro, there are three companies I know of that have more than $700 million of EBITDA that have had uninterrupted growth for 20 years of 10 percent or more. The first is Google, the second is Priceline and the third is Jetro.

From our Fund IV, we invested $100 million (in Jetro) buying 10 percent of the business. Fund IV was an ‘04 fund. It’s basically through its investment period. We’re liquidating it at this point. When it was time to get out of Jetro, what we actually did with it is we brought it into Fund VI.

Fund IV had made 9x their money on Jetro – $100 million turned into $900 million. Our limited partners allowed us to buy it into Fund VI. We put in Fund VI money and all our carry and we reinvested in the business. It’s what you’re talking about in a single transaction.

We’re going to own it hopefully for another seven or eight years. It’s too big to be a nine-times-your-money investment, but certainly in the next three to four years we’ll make a nice return on it. That’s the kind of investment that should be put in a fund of that nature. We’ve had a few of those along the way, the ones you end up selling too early. It’s part of the deal.

The Leonard Green Way refers to your firm’s friendlier relationship/partnership with management teams. What’s your comment on your overall culture?

There’s a whole bunch of things that worked. Some of them were planned. Some of them were sort of accidental. We believe it’s a privilege to manage money for you. You’re our bosses. At some of these funds, it’s like, ‘Well, you’re lucky to get in our fund.’ We don’t understand that thinking. For example, when we did Fund IV, we raised it, and the first year we invested $46 million. It was a $1.8 billion fund. Charging $27 million in fees for the privilege of putting $46 million to work didn’t seem like it’d be fair. So we just waived fees for a year. It engendered good will among our LPs.

As it relates to our managers, we think that people that make us money are special folks. And once you’ve managed a business, or had an important role in managing a business, you’re in the family forever. That means that every time we get a deal, you’re offered the opportunity to put some money to work, in any deal. No fees. No Carry. You can opt in or opt out. It doesn’t matter. You’re in the family.

What it’s created is a wonderful ecosystem, where any time there’s a reference call. The PSSI guys (make a call) and they ask, ‘What’s Leonard Green like?’ and they say, ‘Those guys are great and, by the way, I’m going to be an investor in your business, tell me about your company.’

At the end of the day if you’re buying a great company, which we want – a market leader with great management teams – having this benefit of cross ownership, I just can’t overstate the importance of it.

If somebody has a problem and they maybe don’t want to talk to us about it because it’s lonely at the top, they can call the CEOs of 10 other companies that maybe had the same problem.

That’s what we do that’s probably different than anybody else. Everybody else has a management investment program that gives them breaks on fees, but it’s not quite as loose and relaxed as ours is. That’s really a force multiplier for us.

Correction: This story has been updated to fix an incorrect name in the chart for Green Equity Investors V.