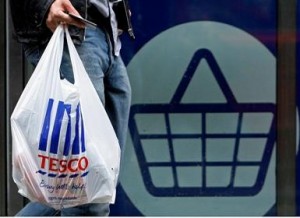 Tesco has had inquiries about S. Korea unit – sources

Private equity firms seen as keen on the business

The appointment of an adviser is Tesco’s first concrete step towards a sale of some Asian assets, which analysts think could be its best bet as it looks to cut debt and fund a turnaround plan at home.

The supermarket group, whose credit rating was cut to “junk” status by Moody’s and S&P in January, is battling to recover from an accounting scandal and reverse market share losses in Britain to discount chains Aldi and Lidl.

South Korea is its largest business outside Britain, with more than 400 stores, 500 franchise stores and more than six million customers a week. The division has attracted several bid enquiries in the past, which has encouraged Tesco to explore a formal sale process, the sources said.

However, some analysts questioned whether it would get a good price.

“It is a forced sell, more of a distressed situation,” Cantor analyst Mike Dennis said.

“Tesco has considerable debts and pension deficits to deal with, let alone a wish list of things to do to help the UK, but they are significantly short of cash and selling South Korea or the Asian shopping malls would be the only two major assets that are going to get that type of a valuation.”

Tesco shares rose as much as 1 percent on the news, bucking a 1 percent drop in Britain’s benchmark FTSE-100 Index.

Tesco, which in December rebuffed interest from Thai billionaire Dhanin Chearavanont in its other big Asian operation in Thailand, and HSBC declined to comment.

The firms listed as interested parties also declined to comment, while sources declined to be identified as the discussions are confidential.

The potential sale comes after Tesco announced in April one of the biggest losses in British corporate history, hit by a 7 billion pounds ($10.7 billion) write-down.

The 96-year-old group, which has dominated the British retail landscape for decades, has paid the price for getting distracted by expensive overseas expansion and failing to spot changing shopping habits at home, as well as the threat from discounters.

Former Unilever executive Dave Lewis, hired in September to lead a turnaround, has cut costs and sought to win back customers with more store staff and improved product availability.

Two people familiar with the matter said on Thursday Dunnhumby could fetch around 1 billion pounds, with Tesco willing to sell the whole business if it could agree to a long-term partnership with the new owner.

Tesco said in April it had net debt of 8.5 billion pounds, while its net pension deficit had risen to 3.9 billion, forcing it to agree to pay 270 million pounds per year into the scheme to help make up the shortfall.

Espirito analyst Rickin Thakrar said a $6 billion sale of Tesco South Korea would fall short of his 4.5 billion pound ($6.9 billion) valuation and that, while it would dilute earnings due to its high margins, it would afford Tesco some breathing space.

“That price is not great but at least it would get them out of severe distress and likely junk status,” Thakrar said. “Right now being junk rated is not good, if interest rates were to go up in the U.K. they would be in a major amount of trouble.”

Including debt, the value of the South Korean business could be $10 billion, the sources said.

Tesco’s South Korean operations generated 5.38 billion pounds of revenue excluding value-added tax for fiscal 2014/15, a 4 percent drop in like-for-like sales from the previous year, according to its annual report.

The business generated about $750 million in EBITDA for the period, and it could be sold for seven to eight times that figure, one of the sources said.