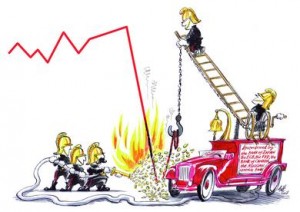 Early in the summer I sat in the Treasury Select Committee listening to ’s managing director Robert Easton say that covenant light loans are good for companies and that clearly their was confusion about them. He even offered to give the a tutorial. Now in late August with an estimated US$300 billion of financial sponsor backed debt that can’t be placed with hedge funds and CLOs coupled with a sub-prime mortgage crisis and the resulting credit crunch and market freefall cov-light has become a dirty word.

Central banks have spent much of the summer providing emergency liquidity to money markets. And they seem to have stemmed a freefall. But it is expected that LBO houses will feel the pinch for the rest of the year as banks have limited lending to US$500m to US$600m for LBOs.

The situation is worse in America than it is in Europe. Of the US$300 billion that needs to be refinanced or find a home only and estimated US$40 billion of that is in Europe – the rest belongs to the US. The US M&A markets are also expected to be affected in a much more serious way than the European one because financial sponsors play a much more important role in mega deals in the US than they do in Europe.

Thomson Financial data shows that in the first semester of 2007 there were 13 mega deals (defined as over US$10 billion) completed in the US. Of the 13, eight were backed by financial sponsors and five by strategic buyers. Contrast these figures with the 20 mega deals completed in Europe in the first half of 2007 – 18 of these were completed by strategic buyers while only two were backed by financial sponsors. So the current credit crunch will have a much larger impact on the US market and the big winners could be US strategic buyers.