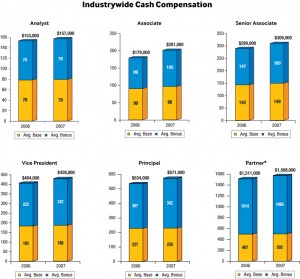 Pay is up across the board for professionals in the buyout business, but the compensation arms race is most noticeable for associates and senior associates. The boom of the last few years has allowed mega-firms to amass unprecedented war chests. It’s also allowed them to open a gulf between themselves and their smaller competitors when it comes to paying associates and senior associates, the heavy lifters of due diligence and tomorrow’s industry leaders, said Brian Korb, who heads up the private equity practice for Glocap, an executive search firm that focuses on recruiting in the alternative asset industry.

One reason that firms are raising pay so dramatically for junior professionals is, simply, because they can, particularly at the higher end of the market. As funds get larger, so do the management fees that firms collect. Beyond that, buyout firms are vying with hedge funds, investment banks and, most of all, each other for what’s perceived to be a limited supply of truly talented people. As recruiters and partners often say, a firm’s success rests just as much on relationships and personalities as on financial models and research. So when a mega-firm behaves like the New York Yankees and dangles big money in front of young up-and-comers, competitors both large and small do what they must to catch up and stay even. “It feels like having to keep up with the neighbors,” Korb said.

The latest Glocap-Thomson Financial study, the “2008 Private Equity Compensation Report,” makes it clear that the smaller firms are having a hard time keeping up with the Joneses, much less the Schwarzmans. Because they have fewer management fees to draw on, but staff sizes that aren’t necessarily proportionately smaller, firms with smaller funds typically provide pay hikes to junior professionals that are smaller than the mega-firms do, both in absolute and percentage terms.

As the pay disparity widens, big firms have an easier time hiring and keeping the most talented junior professionals. And just as a few sour deals can shutter an LBO shop, firms that don’t raise successively larger pools of capital are vulnerable to losing their best and brightest to competitors with more money, Korb said. “You might see some real carnage among LBO funds that haven’t been able to raise new money,” he said.

The disparity has been compounded in the last six years. There didn’t use to be as big a difference between what the smallest players and the largest pay. But when firms such as The or jump from fund sizes of less than $4 billion to more than $15 billion in the space of a decade, the pressure mounts quickly on those they left behind.

The pay landscape is changing in other ways, too, as the buyout industry matures. Just as with corporate law firms or investment banks, pay has become fairly standardized for junior-level employees at LBO firms. Shops have gravitated toward a graduated pay scale in which most firms move in harmony with their competitors.

Within that context, the most pronounced increases are happening at the bottom rungs, in the associate and senior associate positions. Associates typically come from the LBO farm system, also known as investment banks, where they’ve worked for a few years after graduating from college. Senior associates by and large come from the top business schools, having already put in time at buyout shops or investments banks before securing their MBAs.

Glocap says that its snapshot of industry compensation is particularly valuable because it reflects what kind of pay packages it takes to recruit people. Rather than relying exclusively on survey data, which reflect what people earned in the previous year, Glocap compiles its report from several additional sources, including placements it makes in private equity firms, and interviews with fund managers. The salary levels Glocap quotes are a combination of what firms are paying now and what they plan to pay candidates for future start dates, Korb said.

In 2006, an associate at a mega-firm earned an average of $238,000 in cash compensation, including both base salary and bonus and excluding any share of carried interest, according to the Glocap-Thomson Financial study. That same position now pays $290,000 in salary and bonus, a 22 percent year-over-year increase.

Interestingly, in the large firm category, the same position pays $238,000 now, equivalent to last year’s salary and bonus at a mega-firm and a 16 percent increase from a year before. One step lower, in the mid-size range, the average associate makes $207,000 in cash compensation, up 8 percent from 2006. In the two smallest segments, a newly minted associate can expect to earn $172,000 and $157,000, respectively, in base salary and bonus. Both represent 4 percent increases from 2006 levels, according to the study.

How The Small React

Despite lagging in cash compensation for associates and senior associates, small firms can nevertheless attract strong talent by playing to their own strengths, Korb said.

One recruiting tool that they can wield is the promise of a faster path to partner, Korb said. Some associates and senior associates might be willing to take less money in the first few years with the promise they’ll earn much more in, say, seven years when they join the partnership. At a mega-firm, the route to the partnership can take much longer. Small firms also arguably have the ability to share more meaningful amounts of carried interest with junior professionals than do mega-firms with hundreds of employees.

Perhaps the biggest fear among small firms is that their ever-bigger rivals will show no mercy when it comes to cash compensation, which provides more immediate gratification than other incentives. Indeed, some of the firms that have raised big money in the last few years could be paying their people far more if they had to. After all, the cost of doing business doesn’t generally rise as fast as management fees as firms manage more money. A firm that moved up from a $2 billion fund to a $5 billion fund—without dramatically adding to its personnel or overhead costs—has plenty of headroom in its fee income stream.

For now, “compensation has gone up, but in a controlled way,” Korb said. Still, there’s a scarcity of top talent, and a fight over a limited pool of resources could force a change in the rules—and encourage some firms to dramatically increase pay. That’s especially true now that the proliferation of buyout firms, like expansion teams in professional sports leagues, has depleted the depth of talent.

“There seems to be enough people who want to get into this industry,” Korb said. “The question is whether there’s enough good people.”