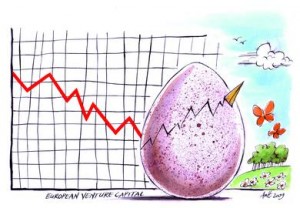 Amongst all this doom and gloom, any sort of good news is jumped upon like a politician on a bandwagon. That’s why the release of a report by US data gurus Cambridge Associates which revealed that venture capital funds outperformed their buyout rivals in the third quarter of last year was so widely reported, and so widely greeted.

The US venture capital industry’s plights have been widely reported, not least in the last issue of EVCJ, but the revelation it is losing less money than its more heralded buyouts cousin was treated like a victory.

It wasn’t so much that venture performed well, it’s that it performed less badly – US VC returns still shrunk by 2.8%. But it is the first time since 2005 that this has happened and the gap between venture and buyouts – which recorded an 8.9% drop in Q£3 – is expected to grow even wider when the Q4 figures comes in and the impact of the banking crisis can truly be seen.

It would be an exaggeration to say this has provided any sort of real, long-term cheer to the US venture capital market, but in Europe there is a growing sense of confidence that the home VC industry may actually begin to shine amidst the financial wreckage.

At the European Venture Capital Association’s (EVCA) recent LP/GP forum in Geneva, there were three areas LPs were interested in: real estate, infrastructure and venture capital. The first two categories there have been growing in popularity for the last two years, but for VC this is new territory.

For years a much-maligned sector, it’s growing in credibility as a legitimate alternative for investment now that the buyouts market has crashed. The European market now has enough experienced venture capitalists, has been through enough cycles and has enough serial entrepreneurs whereby European VCs can justifiably stake a claim to being the next big thing for investors.

Geneva was also the location for the publication of the preliminary stats for 2008, and fund raising for venture capital actually increased on the previous year’s figures by both value – €3.98bn raised compared to €3.14bn – and by number – up from 37 to 47. Early-stage venture funds saw successful final closings increase from 15 in 2007 to 21 in 2008.

The mission now is for an industry-wide push to inform and educate LPs about the benefits of European venture capital. With the US end of the market struggling, and the global buyouts market lifeless, Euro VC can step into that gap.