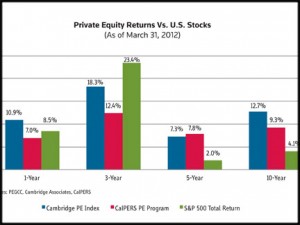 But the council’s aim is not merely to remind people that pensions and other institutions are big investors in private equity. Instead, the council wants to make a larger argument that returns from private equity have exceeded the returns that those pensions and foundations would have earned if they had stuck with a portfolio of ordinary stocks and bonds. In that way, the council is making the argument that private equity is not just what pensions invest in, it’s how those pensions succeed in fulfilling their retirement obligations to teachers and bus drivers and policemen—voters, in other words.

As part of that effort, the council published a survey in October that aimed to highlight private equity’s long-term performance compared to stocks. Bronwyn Bailey, the council’s vice president for research, told Buyouts that the main conclusion of the council’s survey was that “private equity outperforms public markets when viewed on a long-term basis.”

These results offer important context to conclusions that might be reached using only one time frame. In an April article in The New York Times that compared the returns of the Georgia Employees’ Retirement System, which does not invest in private equity, with its antipode, the Pennsylvania State Employees’ Retirement System, which has 27 percent of its assets in private equity and venture capital, only a 5-year time frame was used, a period that happened to coincide with the financial crisis. The article concluded that Georgia’s 1.7 percent outperformance over PSERS during the period was due primarily to Georgia’s avoidance of private equity. The council’s study aims to add critical context to such comparisons by showing that private equity can and usually does outperform public markets over a variety of long time frames.

In all these comparisons the relative results are the same: private equity outperformed public markets over 1-year, 5-year and 10-year time periods, while underperforming public markets over a 3-year period. The underperformance over the last 3-year period was due, the council said in a statement, to the “historic dip” of public equity indexes during the financial crisis, which inflated the S&P 500’s gains during the period.

Steve Judge, the council’s president and CEO, said in a statement that the data “highlights the consistent outperformance of private equity compared to the public markets… No other asset class provides that consistently superior returns of private equity, helping to secure the retirements of millions of teachers, firefighters and police.”

To make sure that these conclusions were not abstractions, the council also compared the private equity returns from a select group of pensions and compared them to the S&P benchmark. While the survey of pension returns wasn’t comprehensive or scientific, all eight pensions in the survey beat the S&P 500 over 5 and 10-year time periods.

Furthermore, said Bailey, private equity’s outperformance does not depend solely on choosing top-quartile fund managers, although that certainly helps an institution improve returns. “These results contradict those people who say that the only way to beat public markets is to invest in top-quartile funds,” she said. “The funds that make up indexes include strong performing ones and poor performing ones.”