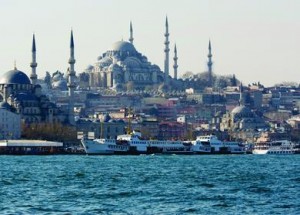 Court cases affecting the survival of Turkey’s ruling political party, the AKP, could begin to affect business confidence if uncertainty drags on. The government is being accused of trying to impose Sharia law in Turkey and subvert the secular political system.

One of the triggers of the controversy was the government’s lifting of a ban on women wearing Islamic headscarves in universities. The government, meanwhile, says that accusations are politically motivated by militant secularists. In theory, the AKP could be dissolved and leading politicians banned from office, although it is possible that even if this were to happen the party would be able to form again under a different name and continue to govern.

So far, the business community appears not to be rattled by the controversies, but it is clear that if the political situation deteriorated, then confidence would be hit.

“Despite all the political ups and downs, the fundamentals of the economy are strong,” says Kerem Onursal, a principal at Turkven, one of the main locally based private equity firms. He points to the country’s large and youthful population and increasing per capita income, which has fuelled the development of the economy.

There was an economic crisis in 2000–01, but since 2002 the economy has been growing by about 7% a year. Foreign direct investment has also soared during that period and inflation and interest rates have fallen dramatically, though they are still high by international standards.

Baris Oney, a partner at Ernst & Young in Turkey, says that despite the political uncertainty and the global slowdown, there is strong interest in Turkey by international private equity investors.

“Funds are keen to channel part of their Continental European or CEE allocations to Turkey, but the main problem for funds is in sourcing deals,” Oney says.

International private equity funds continue to set up in Turkey or expand their teams there. Blackstone, for example, beefed up its Turkish presence by hiring the chief executive of Turkish financial group Yapi Kredi as a senior adviser in its global investment team.

Many Turkish companies that could be targets for private equity are not really in a fit state to receive investment, says Oney, because of inadequate accounting, financial systems or business planning.

“One of our roles is to help entrepreneurs communicate their business plans to external investors and to have international accounting standards in place,” he says

A survey of private equity houses by E&Y in Turkey showed that, while the majority expected a deterioration in the economic climate during the second half of 2008, most still had confidence in the longer-term outlook.

More than nine out of 10 investors said they expected to be net buyers in the second half. Respondents said that they expected deal volumes to remain about the same but that transaction multiples would be lower. There were mixed views about the expected performance of investee companies, with a third saying they expected to see an improvement.

The Turkish private equity market has been developing in the last two years, with a number of large deals. Last year, KKR announced its acquisition of shipping company UN Ro-Ro, in a deal valuing the company at €910m, while in May 2008 a BC Partners consortium closed the acquisition of supermarket chain Migros in a US$3.25bn deal.

Among recent transactions in Turkey is Carlyle Group’s acquisition of a 50% share in shipbuilder TVK Gemi Yapim for an undisclosed price. A Carlyle spokesman said the firm planned to make further investments in Turkey and that the main attractions were the country’s fast growth and the ability to transform domestic companies into international market players. Among the exits was AIG Capital Partners’ sale of its investment in cinema and entertainment company AFM to investment company A1 Group.

Turkven has also been on the acquisition trail. In May, it acquired cosmetics retailer Tekin Acar and it was one of the investors that closed the acquisition of Migros in one of the country’s largest-ever private equity deals. Turkven is also in the process of acquiring a stake in jeans manufacturer Mavi.

In another privatisation, the government is seeking to sell national lottery Milli Piyango. It is likely to be attractive to trade buyers and in May the chief executive of Greek betting firm OPAP said he was interested.

Turkey has not been badly affected by the credit crisis because local banks were not invested in sub-prime assets, says Mehmet Sami, executive board member of Ata Invest, a brokerage house/investment bank, adding: “That means Turkish banks have been able to provide acquisition finance and they stepped in when the international banks withdrew.”

He says that Turkish banks have better capital ratios than many international banks and will continue to fund deals in the mid-market in 2009. However, there will be very few deals of more than €1bn, adds Sami.

Turkven’s Onursal agrees that Turkey has so far weathered the credit crunch fairly well and points out that the Migros deal was financed by local banks.

But, increasingly, Turkish banks are becoming cautious on their funding, he says, adding: “They still have to go to the wholesale market for syndication and they borrow on international markets, which has become tougher and more expensive.”

While Turkey is still regarded as an emerging market, company valuations have increased significantly in recent years. This is partly due to demand but also to the fact that since 2000 Turkey’s risk premium has decreased. Today, although company valuations are approaching EU levels, the more rapid growth of the economy means that investors can often justify paying such prices.

Nevertheless, in the current more uncertain economic climate, there is a disparity between vendors’ price expectations and buyers’ expectations and this factor is affecting the number of transactions closed.

“We have several sell mandates and one recently turned down an offer that was over 10 times Ebitda,” says Mehmet Sami. He adds that there is a large gap between public and private market valuations currently, with buyers in private deals willing to pay up to double the valuations in the public market.

“People are willing to pay a premium for good deals because the economy is solid and if you can identify and acquire a growth engine, you’re going to do well,” he says.

Sectors that are likely to prove attractive going forward are consumer-related businesses, notable retail, as well as healthcare and building materials. But export-oriented companies are likely to face a continuing tough market thanks to the high valuation of the Turkish lira.

People have different views on the economic outlook, according to Onursal, who says: “Once we have political clarity the future looks bright, as we have the highest reserves ever and, while the current account deficit is high, it’s still financeable. Also, thanks to privatisation, the government represents a smaller proportion of the overall economy, which is healthy.”

While Turkey’s large and dynamic economy is attracting significant private equity interest, Greece is still a relatively small market. Among recent deals are Carlyle’s first investment in Greece, with the acquisition of chemical firm Neochimiki, which is expanding its chemicals distribution and production into the Balkan region. Carlyle acquired 74% of the company, implying an enterprise value of €749m, in a public-to-private transaction.

Alexis Damalas, a partner at Deloitte in Athens, says that one of the key attractions of the Greek market is its relative fast growth, adding: “The economy has been growing at 3%-4% a year in the last decade, which is significantly higher than most of Western Europe.”

He says that Greek companies have increasingly been expanding into the rest of South-Eastern Europe and creating regional champions, which are attractive to private equity investors. Among the opportunities going forward, he says, are consolidation in industries such as fish farming and food and beverages, where restructuring of companies could be necessary.

George Momferratos, a partner at Ernst & Young in Athens, says: “The private equity market in Greece is quite small and there have only been a handful of large deals in recent years, such as the acquisition of TIM by a joint venture of TPG and Apax and the acquisition of Hyatt Regency in Greece by BC Partners. Local private equity houses have been traditionally acquiring minority stakes, but are currently looking more aggressively for majority stakes.”

He says that in Greece the private equity industry only accounts for 0.03% of GDP, compared with 1.26% in the UK. As opportunities decline in more developed markets, he expects private equity houses to consider small and mid-sized companies in Greece, especially those exposed to high-growth economies in South-East Europe. But there are obstacles to further development of the market, such as high levels of bureaucracy in the country, he says.

Although the Greek private equity market is underdeveloped, a potentially powerful new player emerged last year, when Athens-listed Marfin Investment Group (MIG) raised a €5.2bn fund in a rights issue. The fund was spun out of Marfin Popular Bank, built up by Greek entrepreneur Andreas Vgenopoulos, and Dubai Financial Group become a key investor in the fund.

MIG’s target, it said, was investments in Greece and the surrounding region. Last year it took a majority stake in Greece’s largest dairy and food group, Vivartia. It also took a 20% stake in listed telecoms company OTE. Controversy raged as MIG tried to pressure the Greek government, which is the largest shareholder, to make senior management changes. MIG sold the stake to Deutsche Telekom in March for €2.5bn.

Momferratos, however, says that although MIG has been highly acquisitive both in Greece and abroad, it does not consider itself a private equity player. “I believe the main difference is that MIG does not build its acquisition and post-acquisition strategy around an exit strategy,” he says. “It is built more on long-term growth and group synergies.”

Going forward, he expects to see two to three deals a year in the several hundred million euro bracket, which would be regarded as large transactions in the Greek market.

“Most of the large deals will be driven by restructuring and, mostly, the South-Eastern Europe market potential,” says Momferratos: “Smaller deals will come from the need for consolidation in various industries, which traditional strategic owners cannot take on themselves.”

He adds that another area in which more activity is expected is in infrastructure, saying: “The current concessions, the peripheral airports and the energy sector are bound to attract private equity groups sooner or later.

“Also, in the next three to five years all the new infrastructure concessions, such as the seven new routes of the national motorway system and the Salonica tunnel, will be fully operational and commercially mature and will therefore attract private equity.”