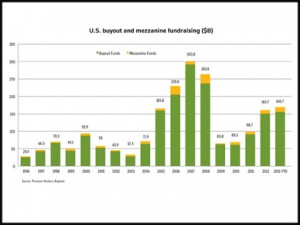 According to preliminary figures from Buyouts, U.S.-based sponsors of buyout/corporate finance and mezzanine funds added $168.7 billion to their war chests in 2013—$161.3 billion for buyout funds, $7.5 billion for mezzanine funds. That was up a healthy 5 percent from the $160.7 billion raised by U.S. sponsors last year. It marks the fourth biggest tally ever, and the most raised since 2008 when $263.6 billion was raised.

To placement agents scouring the globe for pools of capital, the market has a not-too-frothy feel about it.

“It’s not as if a ton of money is flowing into the market,” said Kelly DePonte, partner in the San Francisco office of Probitas Partners. But, he said, “it’s certainly off the bottom where, no matter what, it took forever to raise capital.”

That bottom came four years ago in 2009, when U.S. sponsors raised just $65.8 billion. That was 61 percent fewer dollars than was raised this year. Just two years before that had come the top—the record $300.8 billion raised in 2007. That we’re still down 44 percent from that elephantine sum suggests a market where the supply of funds still outstrips demand. Indeed, Buyouts counted 344 buyout/corporate finance and mezzanine funds in the market this year targeting a collective $349 billion. As a group they still have more than $100 billion to go to reach that goal, a fact that should keep the supply of funds healthy well into 2014.

DePonte called the market “very crowded,” adding that the pool of fundraisers, as it often does, divides into hot firms that raise money in a matter of weeks or a few months; firms that secure money at a more leisurely pace of perhaps 12-18 months; and zombie firms with no chance of raising more institutional money. Back in 2007 about 20 percent of funds would qualify as hot, said DePonte. That dropped to 5 percent in 2009. This year DePonte would put the figure at 10-12 percent, pointing to such firms as Marlin Equity Partners, which wrapped up its fourth turnaround fund at $1.6 billion this year, way ahead of its $1 billion target; Odyssey Investment Partners, which recently wrapped up its fifth fund at $2 billion, ahead of its $1.5 billion target; and Sentinel Capital, which took in $1.3 billion for its fifth fund, easily beating its $1.1 billion target.

Even in a market generally viewed as LP-friendly, such firms can command premium terms. At press time Atlas Holdings, a Greenwich, Conn.-based turnaround shop, wrapped up its second fund at $900 million after a three-month fundraise, drawing commitments from such investors as ATP, Northern Trust, Private Advisors, RCP Advisors and Unigestion. Andrew Bursky, co-founder and managing partner, said that the firm offered investors a conventional 2-and-20 deal with the twist that it gets a premium carried interest of 25 percent if it clears a target performance hurdle. (Separately, Buyouts learned that the hurdle is a 2.5x investment multiple net of fees.) Capstone Partners was the firm’s exclusive placement agent.

On the demand side of the market, record distributions have played a big part in the flow of capital into new funds (see story, p. ). During the one-year period ending June 30, for example, the Washington State Investment Board received $4.1 billion in distributions, or just about a quarter of the $16.4 billion value of its entire buyout-heavy private equity portfolio. That is money that the state appears to be rapidly recycling into new limited partnerships. Washington State Investment Board has committed some $7 billion to about two dozen funds over the last two years.

Returns have also been on the upswing, giving investors more confidence in the asset class. The latest numbers from Buyouts show that 2008 vintage domestic buyout and turnaround funds generated a median IRR of 10.6 percent and top-quartile IRR of 19.0 percent, a big improvement over the to-date lackluster 2005 and 2006 vintages and very close to the industry’s median performance since the early 1980s. “People are feeling better about where their portfolios are right now,” said Probitas Partners’s DePonte.

Indeed, another source close to the fundraising scene pointed to endowments and foundations as a group that made more of a splash in 2013, if a cautious one. He pointed in particular to the David and Lucille Packard Foundation, Howard Hughes Medical Institute, University of Virginia and the William and Flora Hewlitt Foundation as active in the private equity market over the last year. European and, to a lesser extent, Asian investors are active in the United States, while Middle Eastern investors have broadened their appetites beyond just the big, brand names, he added. On the home front, some big public pension funds, like those in Florida and Wisconsin, seem to have a growing appetite for smaller commitments, he said.

The latter observation is consistent with the results of the latest institutional investor survey conducted this fall by Probitas Partners. The survey found some 62 percent of respondents saying they planned to focus most of their attention investing in U.S. mid-market buyout funds of $500 million to $2.5 billion in size in 2014, while another 41 percent said they would spend most of their attention on U.S. small buyout funds of less than $500 million. Just 8 percent said the same of U.S. buyout funds of more than $5 billion. Respondents could pick up to five categories.

Of course, institutional investors may tell pollsters they don’t have a big appetite for mega-funds. But when it comes to brass tacks that is where we see the money flow.

The Jordan Company held a first close of $1.1 billion for The Resolute Fund III, taking it more than a third of the way to its $3 billion target. The mid-market specialist has offices in New York, Chicago, Stamford, Conn., and Shanghai. New Mexico Public Employees’ Retirement Association made a commitment, as did Houston Municipal Employees Pension System and Texas County & District Retirement System.

Opportunities to invest with distressed debt and turnaround funds brought out the contrarian in many investors this year. Of the specialist funds tracked by Buyouts, the distressed/turnaround category raised the most money, at $16.5 billion. In this category count Aurora Capital Group, which raised $550 million for its second fund targeting distressed debt and turnaround investing, while Littlejohn & Co. recently began talking to investors about raising a fifth fund with an expected target of $1.5 billion.

Energy and power funds remained popular, buoyed by returns that have been strong for well over a decade. They took in $13.7 billion altogether this year. Among the big winners, EIG Global Energy Partners, which spun out of TCW at the end of 2010, held a final close on its sixteenth fund at $6 billion. Backing came from Colorado Fire & Police Pension Association, Denver Employees Retirement Plan, New Mexico Educational Retirement Board and New Mexico State Investment Council.

Mezzanine and tech-focused firms had modest years, each securing $7.5 billion. Debut funds took in $4.3 billion, by our count.

The fundraising market appeared to have decent momentum heading into 2014.

The year ended on an up-note, with $45.4 billion raised in the fourth quarter. That was up from $44.2 billion in the third quarter, and way ahead of the $31.2 billion raised in the fourth quarter of 2012. Probitas Partners’s DePonte predicted another 5 percent to 15 percent rise in U.S. fundraising in 2014, while our other source close to the fundraising market thought the market could jump more than 20 percent.

Solid returns and a continuing flood of distributions should make for open wallets at institutional investors. Acting as a drag will be high prices for target companies, which has many GPs cautious about overpaying and wary about pulling the trigger.

And overhanging all is the worry that the economy could start to sag once the Federal Reserve pulls back on its massive buying of mortgage-backed securities to help keep interest rates low.

”There’s fears that the perceived strength may not be real,” said DePonte.

(Correction: The $168.7 billion reported raised year to date in 2013 was the most raised since 2008, when $263.6 billion was raised. The original version of this story provided incorrect figures.)