Chalk this up to another sign of impending doom: Seventy-six private equity-backed companies are listed on Standard & Poor’s “weakest links” report from March 8. That is the largest number of PE-backed companies on the list since the great credit freeze in February 2009.

S&P’s monthly report on weakest links highlights companies most at risk of default. So far this year, seven portfolio companies have defaulted and three have filed for bankruptcy, according to S&P.

The energy and power industry continues to be depressed due to anemic oil prices. Thirty-two energy and power companies so far this year have either been included on the “weakest links” list, defaulted or filed for bankruptcy protection — by far the most of any industry.

Chaparral Energy Inc, the Oklahoma City-based oil and gas exploration company, received a default rating on March 2 after it elected to not make an interest payment on its senior notes. Chaparral, which is backed by CCMP Capital Advisors, has affected debt of $1.25 billion.

Meanwhile, Midstates Energy LLC, with almost $4.9 billion in debt, made the list because it is seen as a prime candidate for a Chapter 11 bankruptcy filing in the near future. Midstates is sponsored by First Reserve Corporation.

All told, there were 231 sponsored and non-sponsored companies on the list. The entire list has an aggregate affected debt of about $330.4 billion.

To make the “weakest links” list, companies must have had speculative corporate credit ratings of B- or lower with either a negative outlook or a negative CreditWatch implication on Feb. 23. From 1981 to 2015, an average of 7.2 percent of all global entities rated B- defaulted within 12 months, and the average default rate was much higher for entities rated lower than B-. 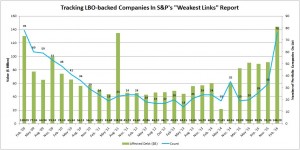 Update: This story was updated to include fresh data released by Standard & Poor’s on March 8, 2016.