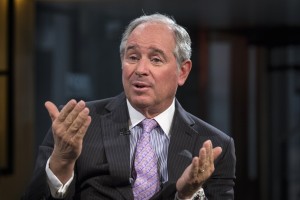 Blackstone pulled in $57 billion in commitments last year, up $6 billion from 2013, for energy, real estate, hedge fund, private equity and credit funds, among others. It raised $19 billion in the fourth quarter alone, about $2 billion more than it raised in the same quarter a year earlier.

Even with the big numbers, Blackstone Chairman and CEO Stephen Schwarzman sees plenty more gas left in the tank, especially if the firm’s efforts to reach out to individuals continue to pick up steam beyond the $11 billion drawn from wealthy retail investors in 2014. Only about 2 percent of retail investors’ assets are in alternatives, compared to roughly 20 percent for institutional investors, he said.

“How are people going to retire? Not on Social Security, there’s not enough money for most Americans that we are one of the major answers for that,” he said on a conference call with analysts. “So the numbers could be very, very large over time, but one thing I think for sure is they are going up as more and more people have better and better experiences with these products.”

BTAS is open to accredited investors and marketed through two ultra-high net worth distribution systems. Under the strategy, a special investment committee decides how much they want of different funds and different sectors.

During the fourth quarter, Blackstone took in $723 million for its Tactical Opportunities investments, and $100 million for its secondary infrastructure fund. Its fourth European real estate fund drew in $1.7 billion, its Asia real estate fund captured $400 million, and Blackstone Real Estate Debt Strategies raised or invested in $1.1 billion. Its European credit strategy drew in $1.1 billion, while its BDCs logged inflows of $1.7 billion.

Looking ahead, Blackstone is launching fundraising efforts around its largest funds, including $16 billion for its flagship Blackstone Capital Partners VII, and $13 billion for Blackstone Real Estate Partners VIII. Other big pools on the horizon include Blackstone’s second Tactical Opportunities fund, which is seeking up to $8 billion.

Schwarzman said 2015 looks like a good year for fundraising.

“We are also seeing great traction with several new and innovative products which will grow to be quite sizeable over time,” he said.