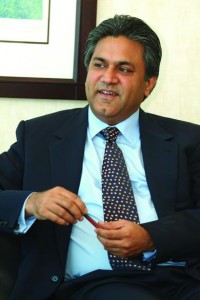 With all of the bad news that one is hearing about the rest of the world and the fact that this is a time for us to be anxious and have introspection and that markets are going to continue to be both volatile and reasonably negative over the course of the next few months. What I am telling you is that there is a part of the world which is running contrary to that – it’s the Middle East and there is a lot of good news. Many people have already invested there some with us and some directly so the news has kind of gotten out. But I will share with you where we at Abraaj Capital are finding pockets of opportunity.

Stop thinking of MENA and think of the term MENASA – Middle East North Africa and South Asia. This is a contiguous area if you think of the history they’ve shared going back 1,000’s of years from the time of the Persian Empire. Cultural, spiritual, trade relations India and Pakistan have more in common with the Middle East than they have with China or Singapore. The GCC has a population base of 5m from India another 2m from Pakistan and these are not just blue collar workers but professionals too. From the Middle East we view India perhaps not as you do in the West as a separate market with a separate appetite. We from the Middle East see ME companies leveraging off Indian opportunities and vice versa. The majority language is Arabic from Morocco to Iran. India is the largest Muslim country in the world in terms of population in the world. You have the high income oil producing countries in tremendous need of human capital and talent and that talent is coming from the countries which are resource poor but have tremendous pools of talent. When we look at the growth in this region it is going to continue at a pace of 6% to 7% over the next 10 years.

For example Qatar today has a GDP per capita of US$80,000 – that’s way larger than anybody else. And when you have so much money being produced in a country of 500,000 people, how do you use it? Qatar has done some fairly miraculous diplomatic initiatives over the course of this year and last year and created resolutions to problems that that the rest of the world has grappled with and not been able to do much about. It is important to highlight that within the region the issues that need to be dealt with are best dealt with within the region. Of course when one looks at this region from the outside you look at Iran and Iraq and brush the whole region off as instable. The reality is that the region has been dealing with that instability for the last 3,000 years. It is the birthplace of Christianity, Judaism of Islam and for large elements of that time all these religions have live in peaceful co-existence. It is only in the last few decades that there has been a bit of polarity, quite a lot of insularity and as a result led to outside interference. Political situations can be isolated and the region can be a good place for investment. I know of a lot of American companies that want to invest in Iraq. Personally, living in the region, I wouldn’t do it but at least not for the foreseeable future – I don’t have the risk appetite.

The region is producing trillions of dollars in terms of excess revenue as a result of oil. The estimates range from US$800bn to US$1trillion per year in surplus that are going to be banked as a result of this level of oil prices. But MENASA is not just an oil story – the reality is we have a very fast growing population. We have an incredible amount of FDI – everyone talks about FDI into India. Very few realize that Saudi Arabia experienced more FDI inflows than India over the course of the last three years.

There are lots of opportunities in the region and lots of reasons to be optimistic.