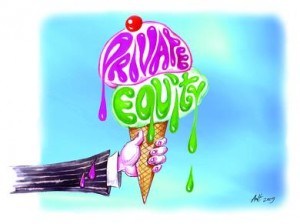 It says something about the state of the buyouts market when a £553m secondary transaction is the biggest European LBO of the year. Even a year ago, this would have been standard fare, slap-bang in the middle of the mid-market.

Not now though. Now it’s being held up as a sign of things to come, an indication that the leveraged markets are starting to creak open and a herald of better things to come.

Unfortunately, it’s late June at the time of writing, and everyone has already wound down for the summer, so any reopening of the market is likely to be put on hold until September at the earliest.

I say “wound down” – it’s difficult to get any further down than it has been this year. A deathly quiet start gave way to an early spring full of chatter, which failed to amount to anything and everyone stopped chattering, realised nothing was going to happen and turned attention to holiday brochures.

The Wood Mackenzie deal – sold by Candover to Charterhouse Capital Partners – is a significant step in the right direction though. It shows that, for the right deal, there is debt available, and of course it’s given a much needed boost to Candover’s balance sheet.

Candover have been the biggest casualty to date of the LBO market crash, and many predict it won’t be the last. This is unlikely – although the Great Game (where you guess which firm is going to fall over next) has been the subject of numerous lunchtime chats, it’s hard to see where the next high-profile fall is going to come from.

Various names have been mooted – which I’ll refrain from mentioning in print – but, other than a few portfolio companies going under, the LBO firms will be safe. Can you really see any of the top tier mega-buyout houses shutting up shop?

More likely victims are in the small to mid-market space, firm’s that perhaps over-leveraged their deals, that haven’t got a strong track record of good returns, and have a host of struggling LPs who can’t meet their commitments.

But even here, there won’t be a plethora of collapses – private equity firms take a long time to die. As a consequence, as long as a struggling buyout house can hold out until next year (assuming the market picks up), they’ll probably survive. Get a decent exit or two under their belts, explain away the failed portfolio companies as a sign of the times whilst simultaneously pointing out that every firm has been through the mill, and they should still be around to sun themselves in 2010.